Apart from swoon-worthy characters and catchy songs, Disney movies are also well known for their impeccable graphics and impressive architecture. From tiny homes in the woods to grand royal castles, these movies have always made users wish they could live in these structures, even if it is just for a day. Princess Aurora’s room from Sleeping Beauty, the candy house from Hansel and Gretel and the Cinderella Castle are just a few examples — and some architects have been taking note.

But while it might be difficult to run along with Elsa on the ice-sculpted staircase or hide with Winnie the Pooh in his treehouse, there are some real alternatives that are no less magical. Below is a list of a few structures found across the world that exhibit forms, characteristics or aesthetics that resemble some iconic Disney homes. 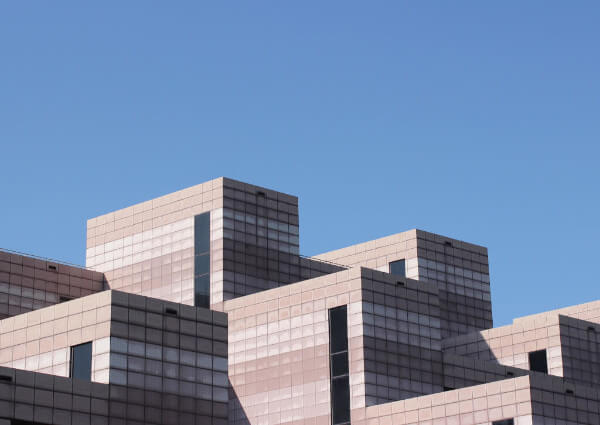 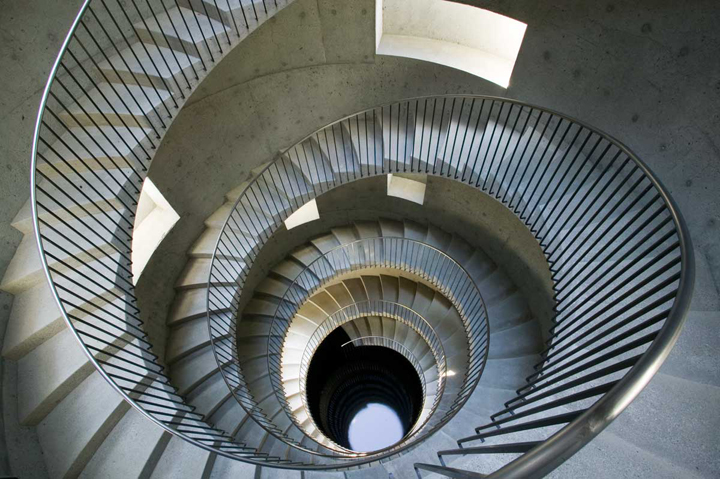 Rapunzel’s tower has long been associated with entrapment and, of course, wishes for long golden locks. While charming and beautiful, the tall structure standing alone in the woods cannot be mistaken for anything but the home of a hermit who wishes to stay away from society.

In the Ann Hamilton Tower by JENSEN Architects, we see the sense of seclusion and detachment in its bare concrete façade and concealed fenestrations. But unlike the Disney version, this performance space features large double helix stairs that invited visitors to stand on and observe performers on the other end, allowing the two sides interact with one another (albeit at a distance). 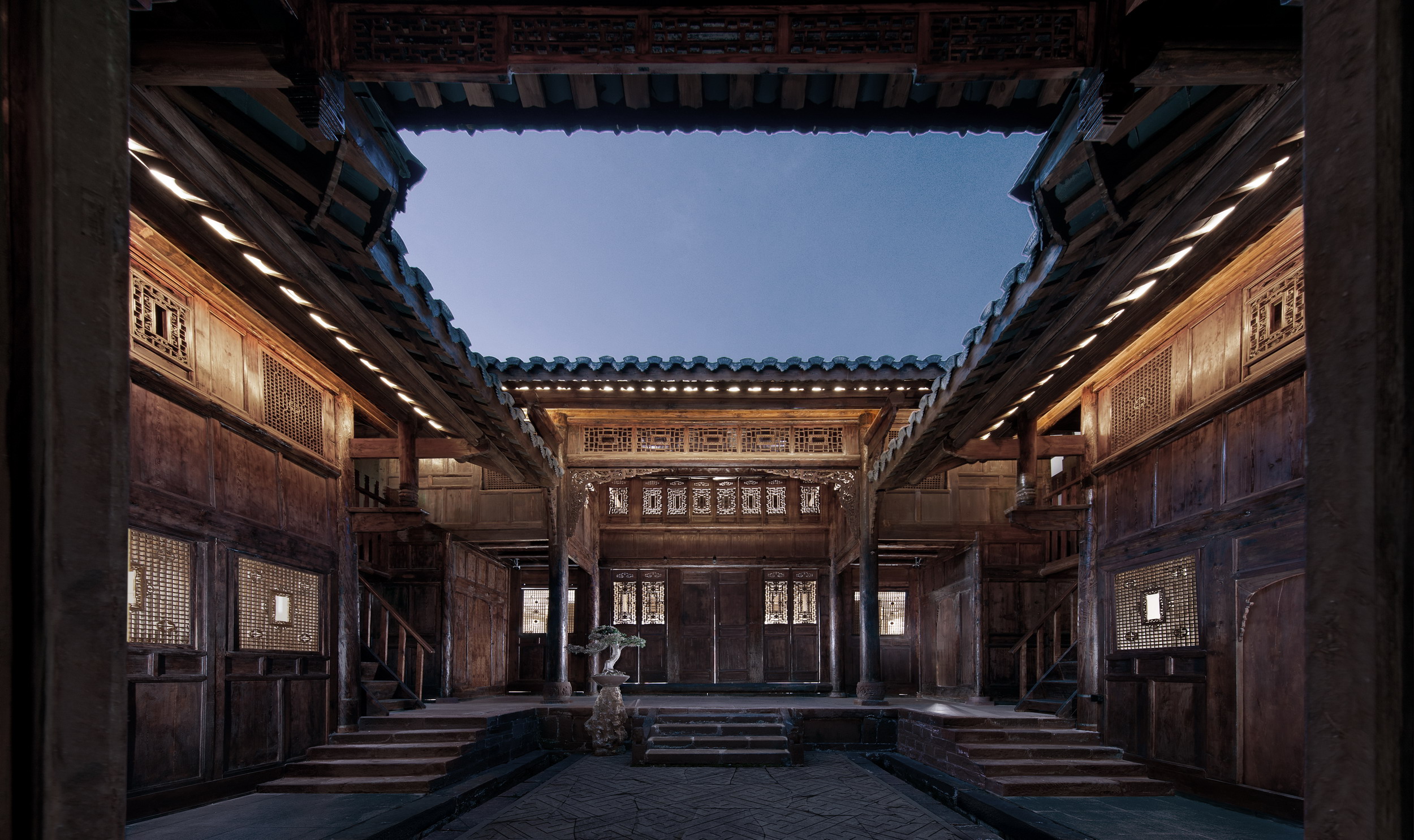 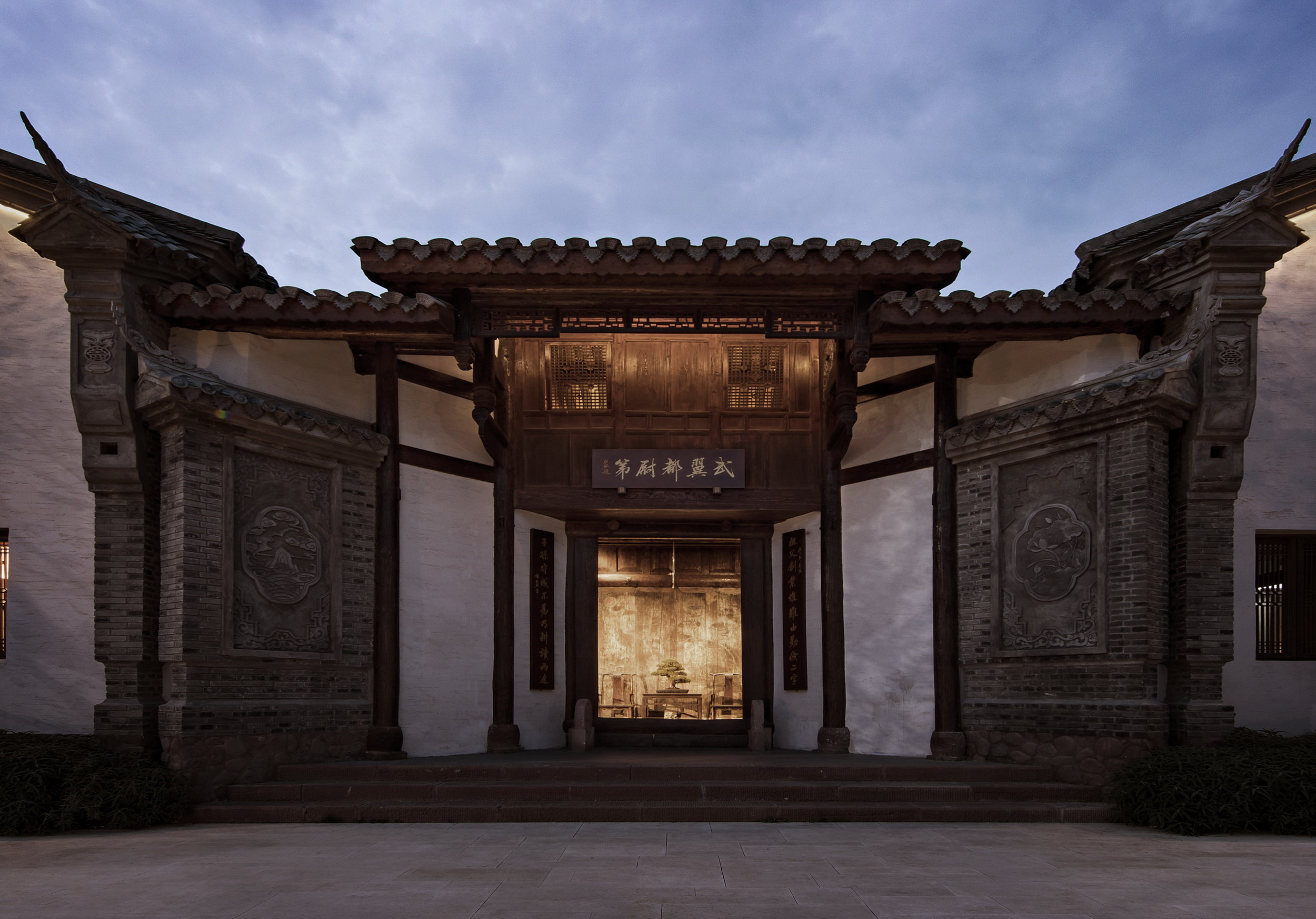 Mulan’s home in the 1998 animated film is laid out in a rectangular plot with a central courtyard. Just as in the layout, with its sloping roofs and red accents, the form of the building also looks to traditional Chinese residential architecture; it even comes with an adjoining stable and a serene garden with a river flowing through.

Qionghai Lake 17° General Hall Hotel in Xichang also stays true to its heritage by keeping intact the wooden structure and details that have existed on the site for over a century. Beijing Puri Lighting Design Co.,LTD. retrofitted the former residence of Liu Xiangzhi, an official in the Qing Dynasty, to create a dreamlike experience that is rooted in history. Warm white lights in the forms of dots, lines and planes are added throughout the complex to accentuate the architectural details of the hotel. 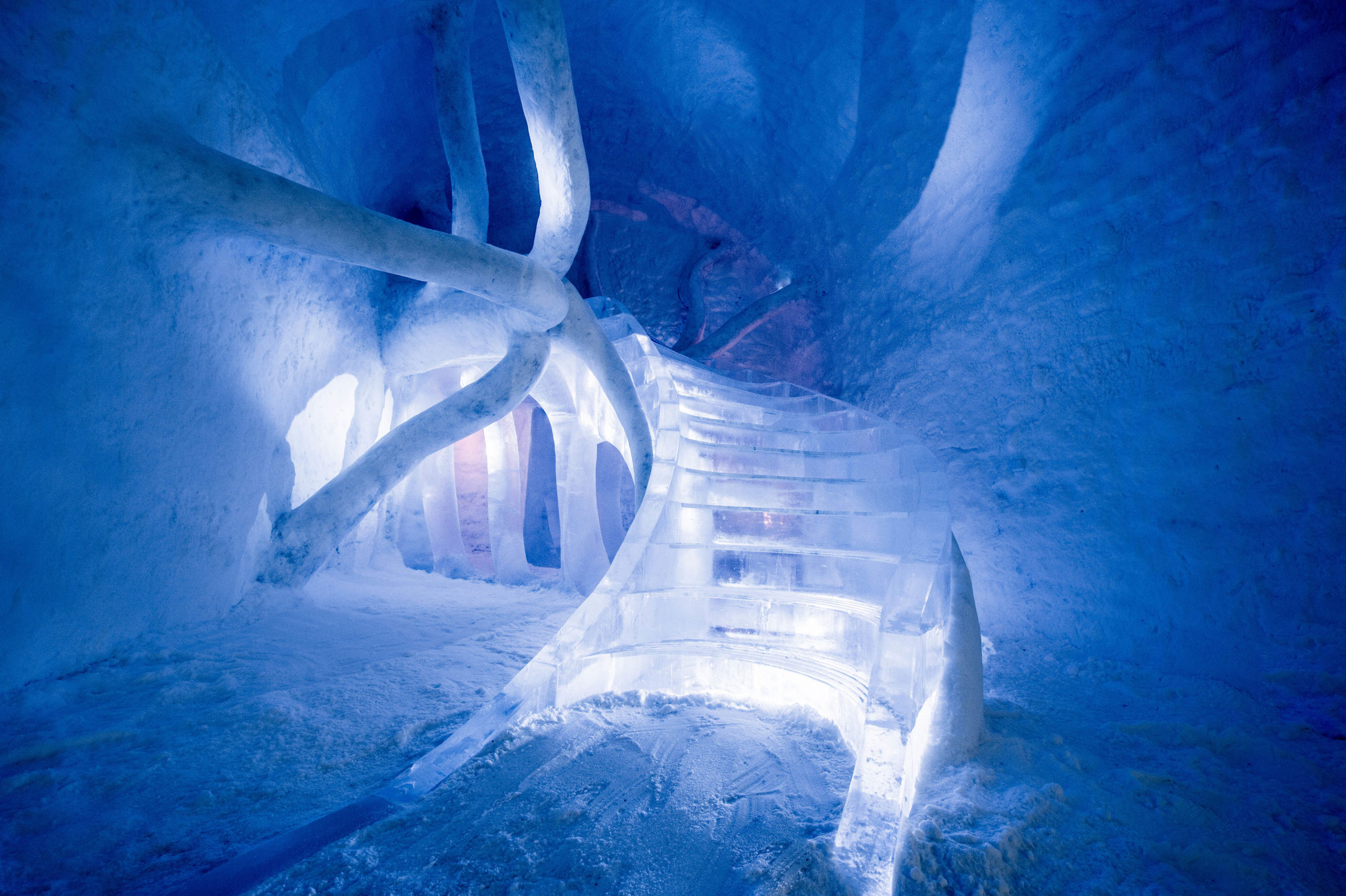 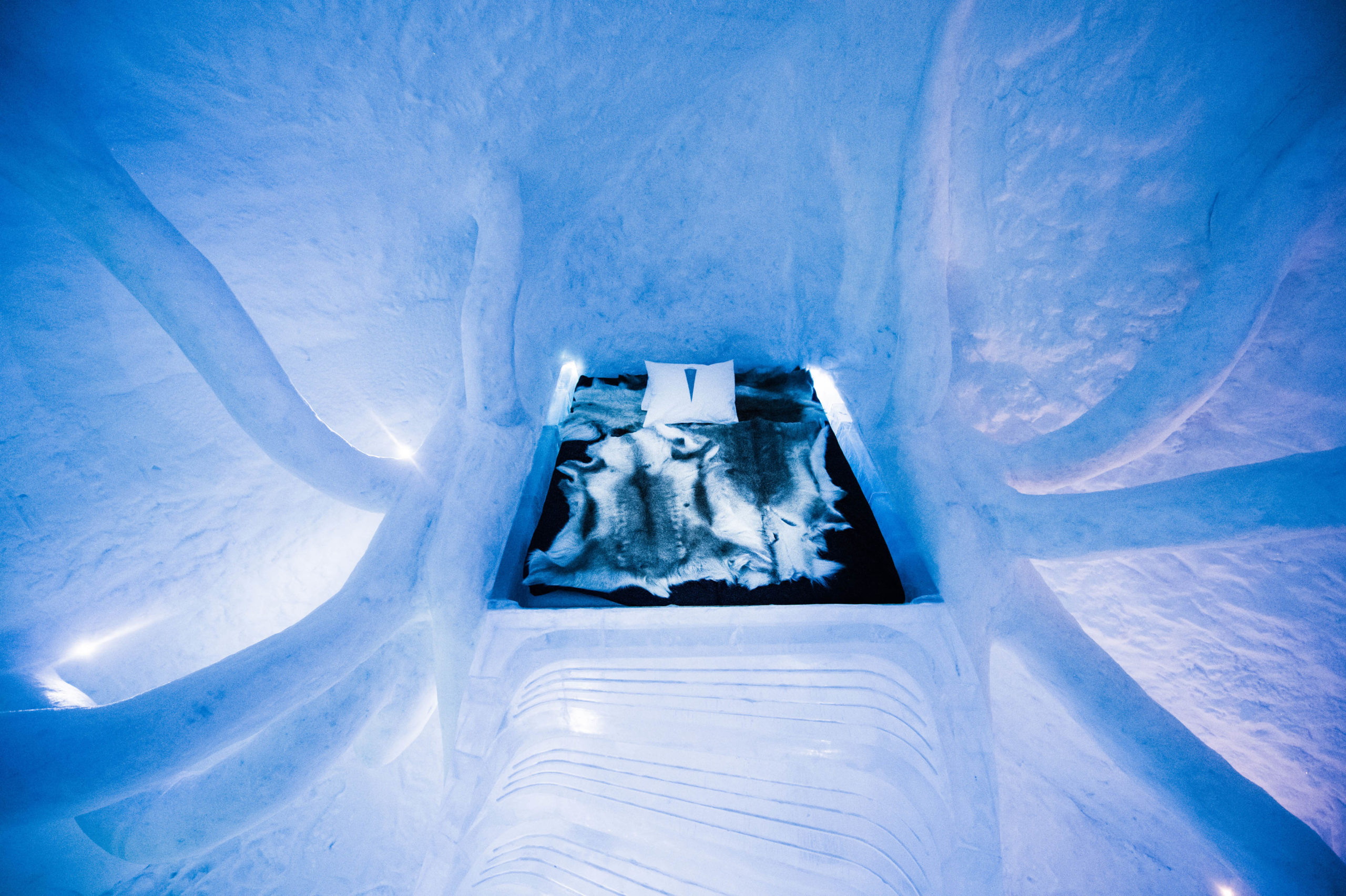 Whether it is due to its catchy tune or to the stunning graphics, Elsa singing “Let It Go” as she strides along a snow-capped mountain to build her icy castle is a scene that is not easily forgotten. Here, she magically produces a large castle with stunning pink and blue crystalline forms and details out of thin air.

What can’t be accomplished with magic in real life, Atmos Studio does with modern temperature control methods and actual ice. Icehotel 365 in Sweden is a space where visitors can experience art in the form of frozen water and experience living in ice suites. For this hotel, Atmos created an art suite complete with a swooping staircase and icy tentacles that partition spaces and create a mystical loft for sleeping. 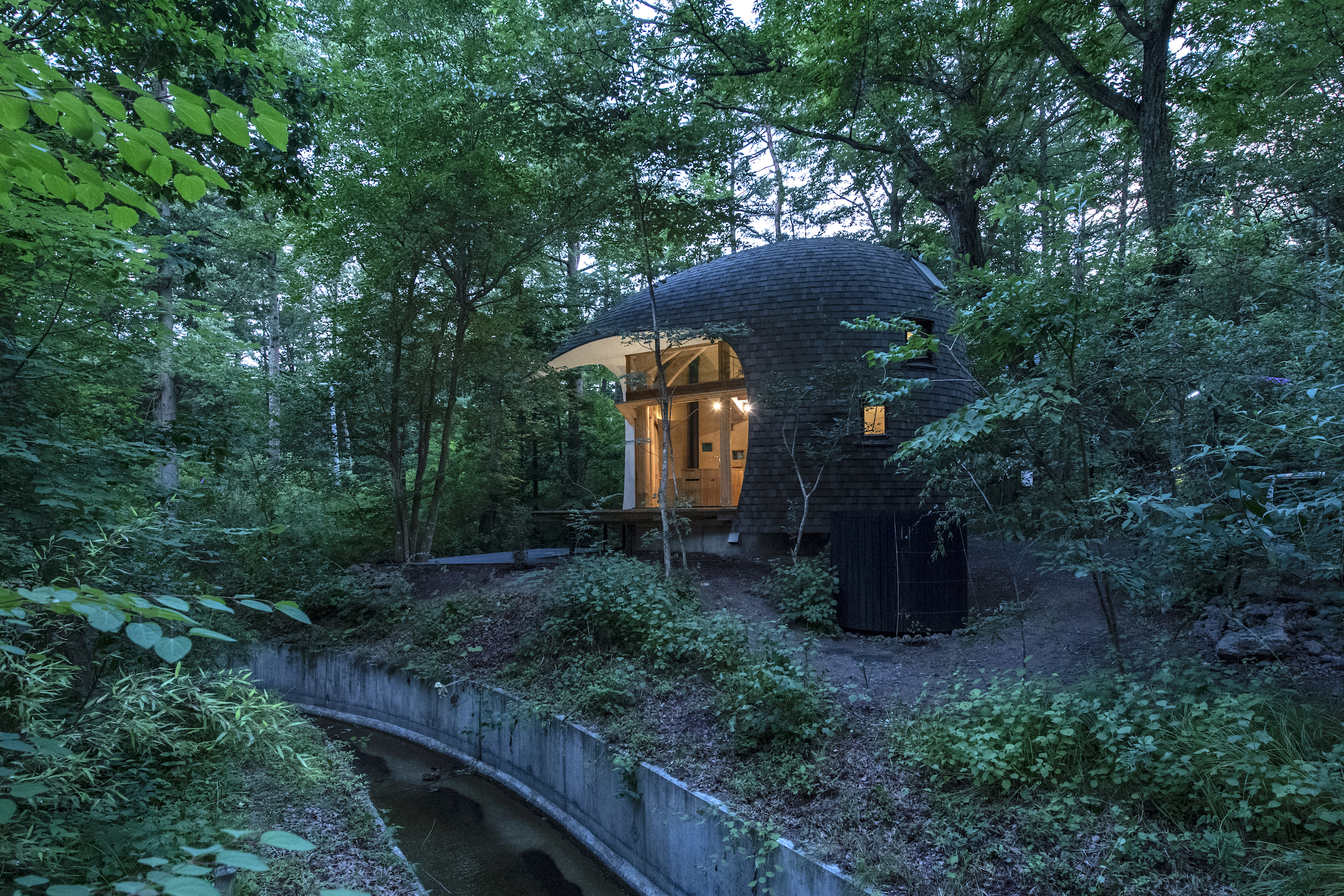 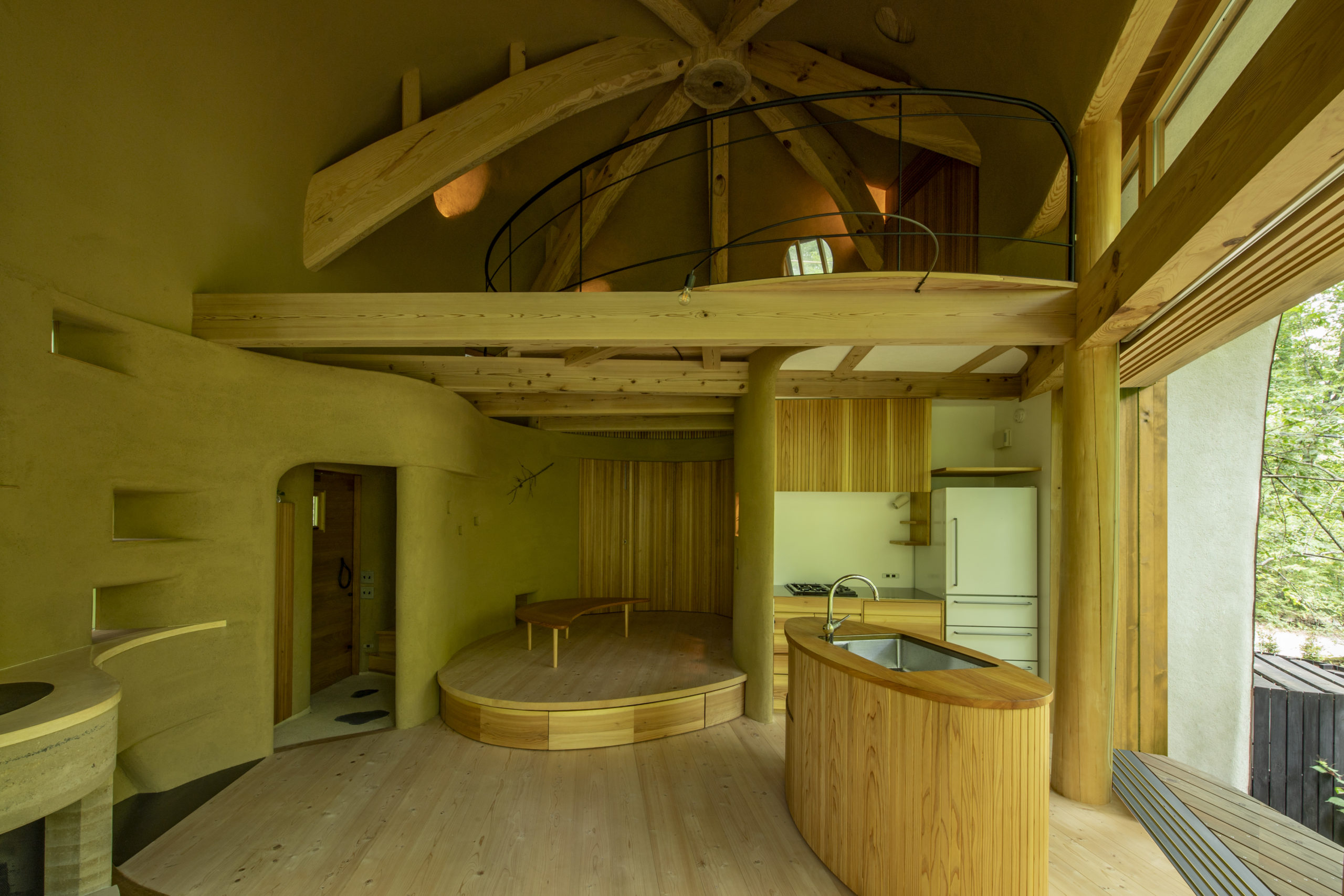 When running away from her evil stepmother, Snow White found sanctuary in a quaint cottage in the woods. That forest home for the seven dwarfs was crafted using natural materials and rustic décor elements.

Likewise, in the Japanese Shell House, the language of forest provides the perfect hideout away from civilization. Its curved form partially encloses a kitchenette, island, dining area, bathroom and bedroom. Local wood, earth and manual construction methods all contribute to the project’s sustainability. A large opening on one side allows light enter the house, while the shingled cocoon on the other side helps it to blend with the surrounding forest.

The Beast’s Library from Beauty and the Beast 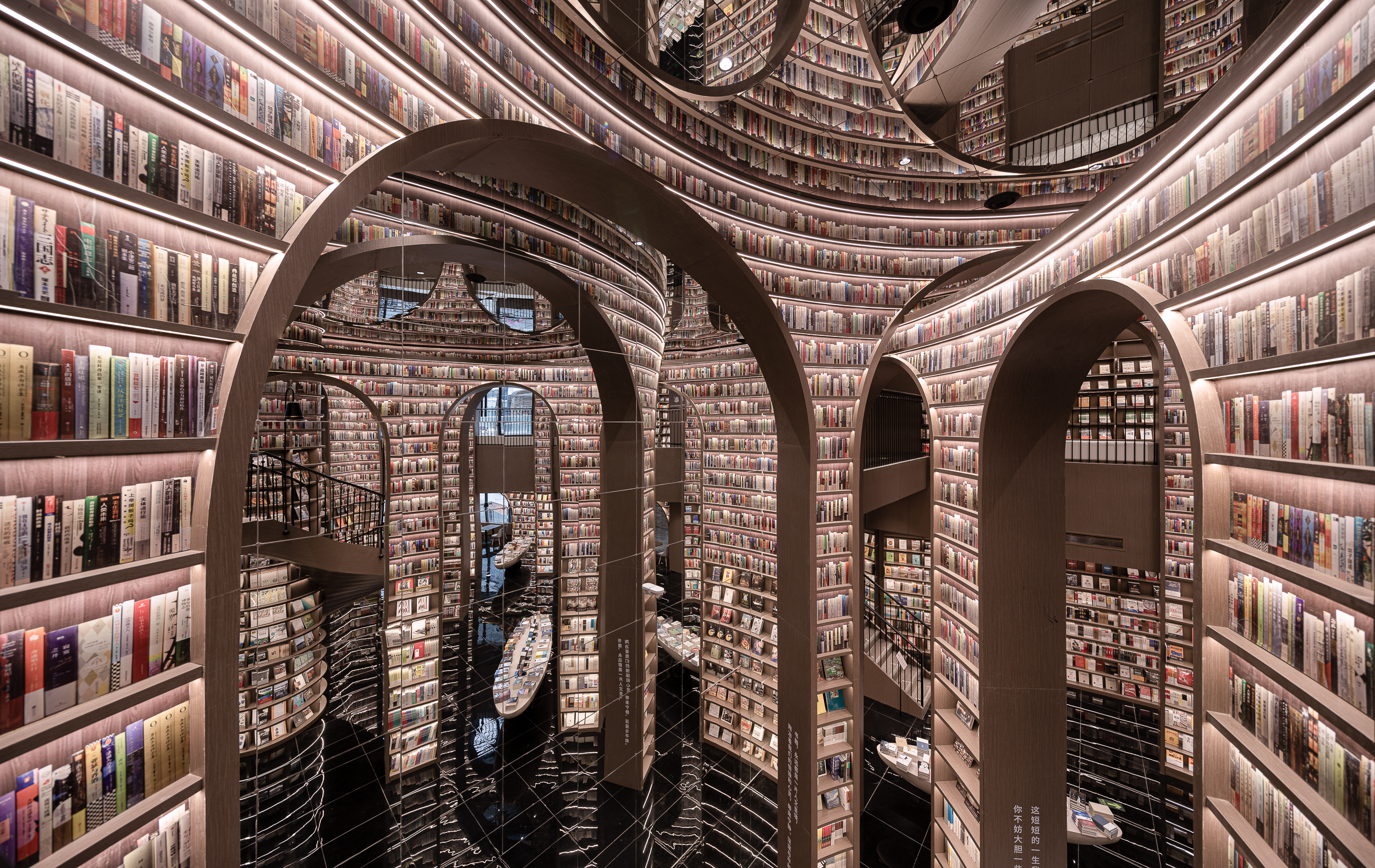 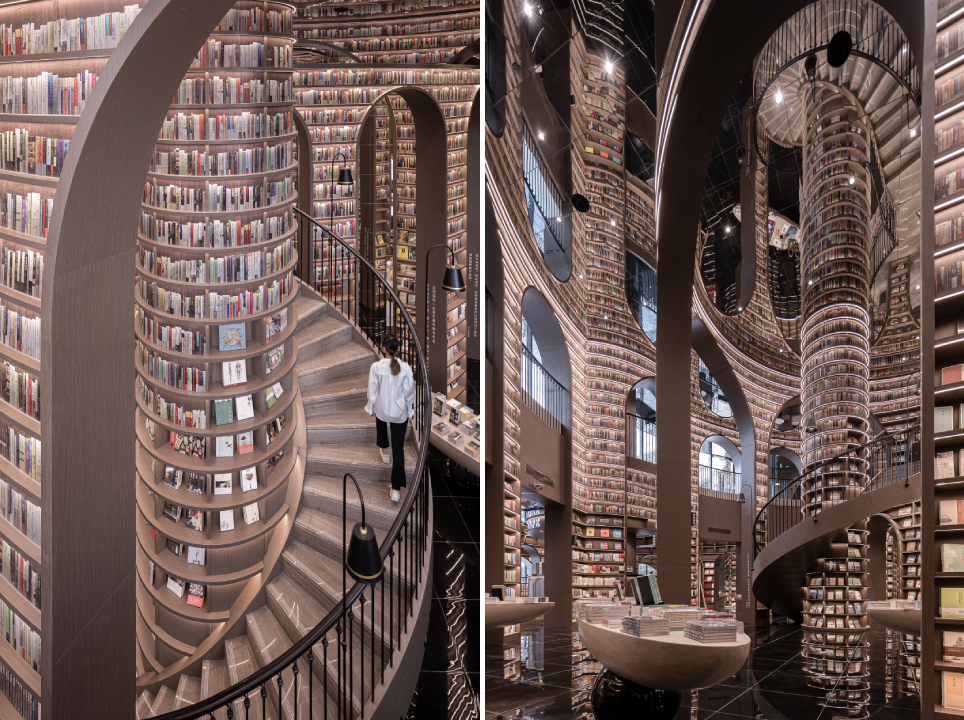 The Beast’s library has been a fantasy of many book lovers across the world. Endless stacks of books, grand spiral staircases and classic motifs and ornaments all hint at magical adventures beyond the pages of these books. A similar real-life example of a bibliophile’s paradise is the Dujiangyan Zhongshuge conceptualized by X+LIVING. Tall arches interconnect with curved shelves and dramatic staircases to create the illusion of a book-filled maze that is isolated from the outside world. The arches separate spaces and create designated pockets for different genres. Meanwhile, readers are invited to indulge their curiosity as they explore the space to find books that they love.

Pride Rock from The Lion King 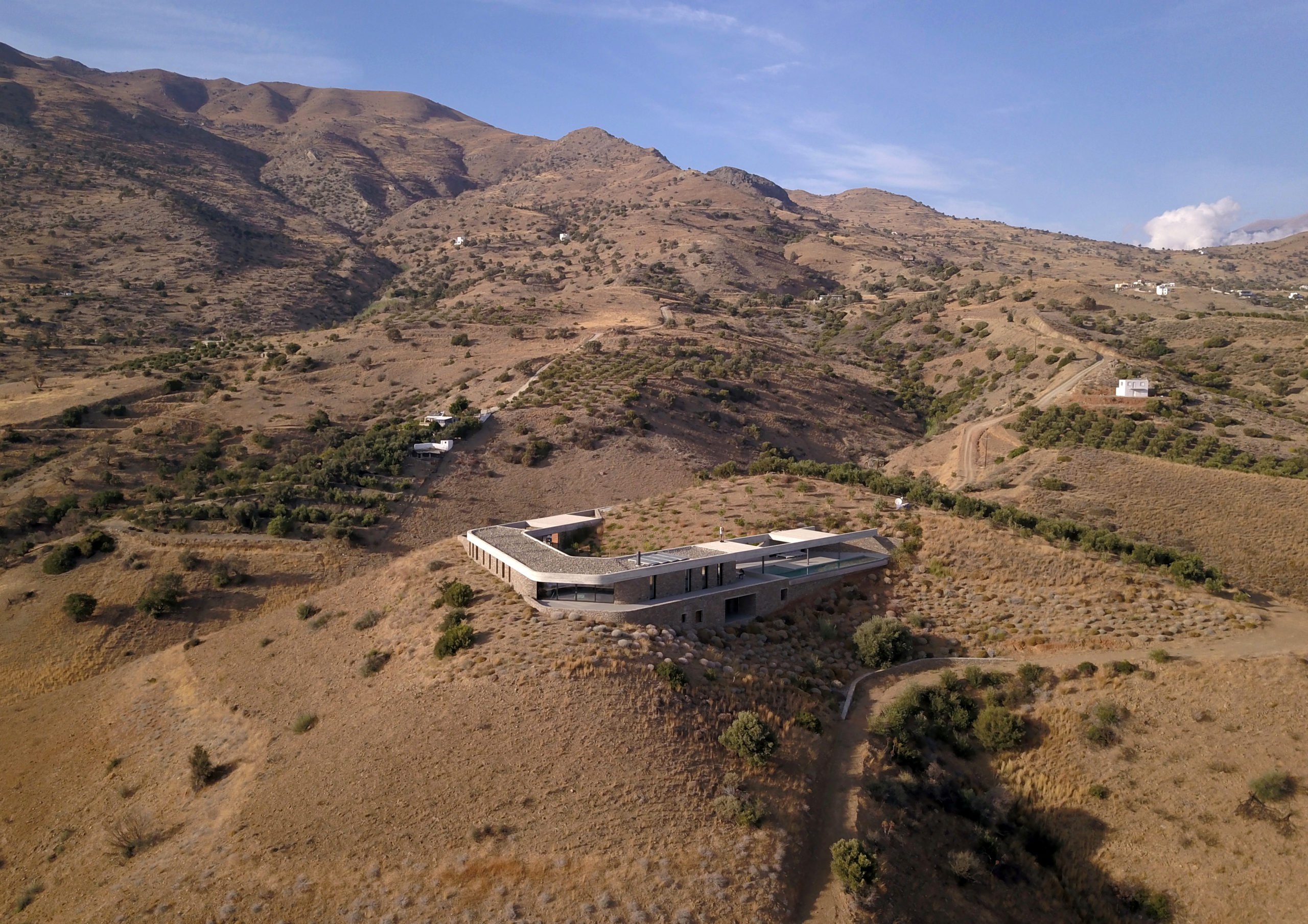 When Simba was born, Rafiki — the mandrill who acts as advisor to the animal kingdom — trotted to the edge of the Pride Rock to introduce the future ruler to the animals of the Pride Lands. This massive rock formation creates a perch that overlooks the entire kingdom; the natural monument allows the ruling lions of the pride to observe the entirety of their land.

In a not dissimilar manner, Ring House by Deca Architecture stands alone on a hill and overlooks the endless sea on one side. The residence follows the natural contours of the hill and is a landscape preservation intervention. The house’s concrete beams provide shade while allowing natural ventilation. They are also fitted with solar panels to generate power. In addition to this, pillars covered in stone make up the external walls of the home. 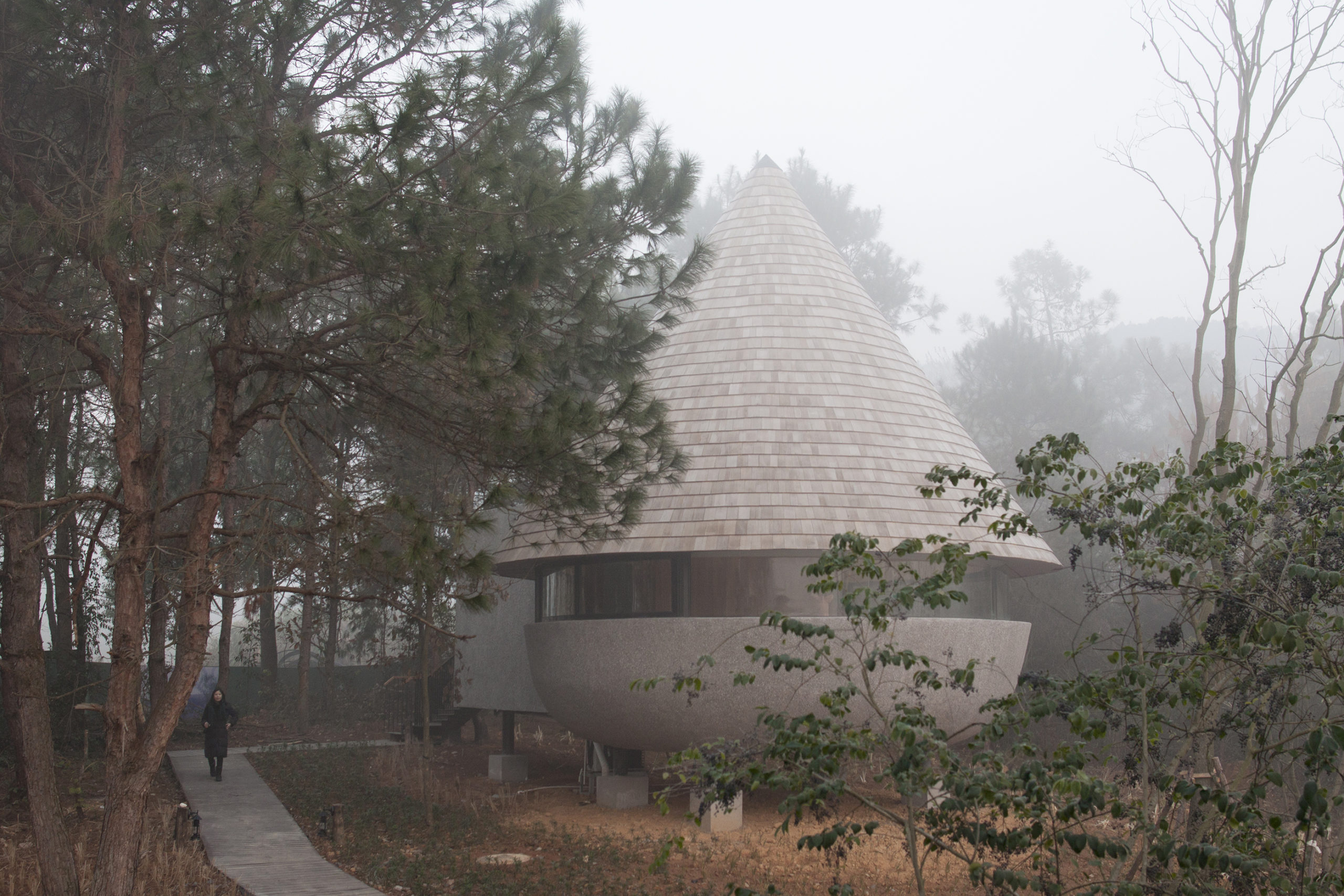 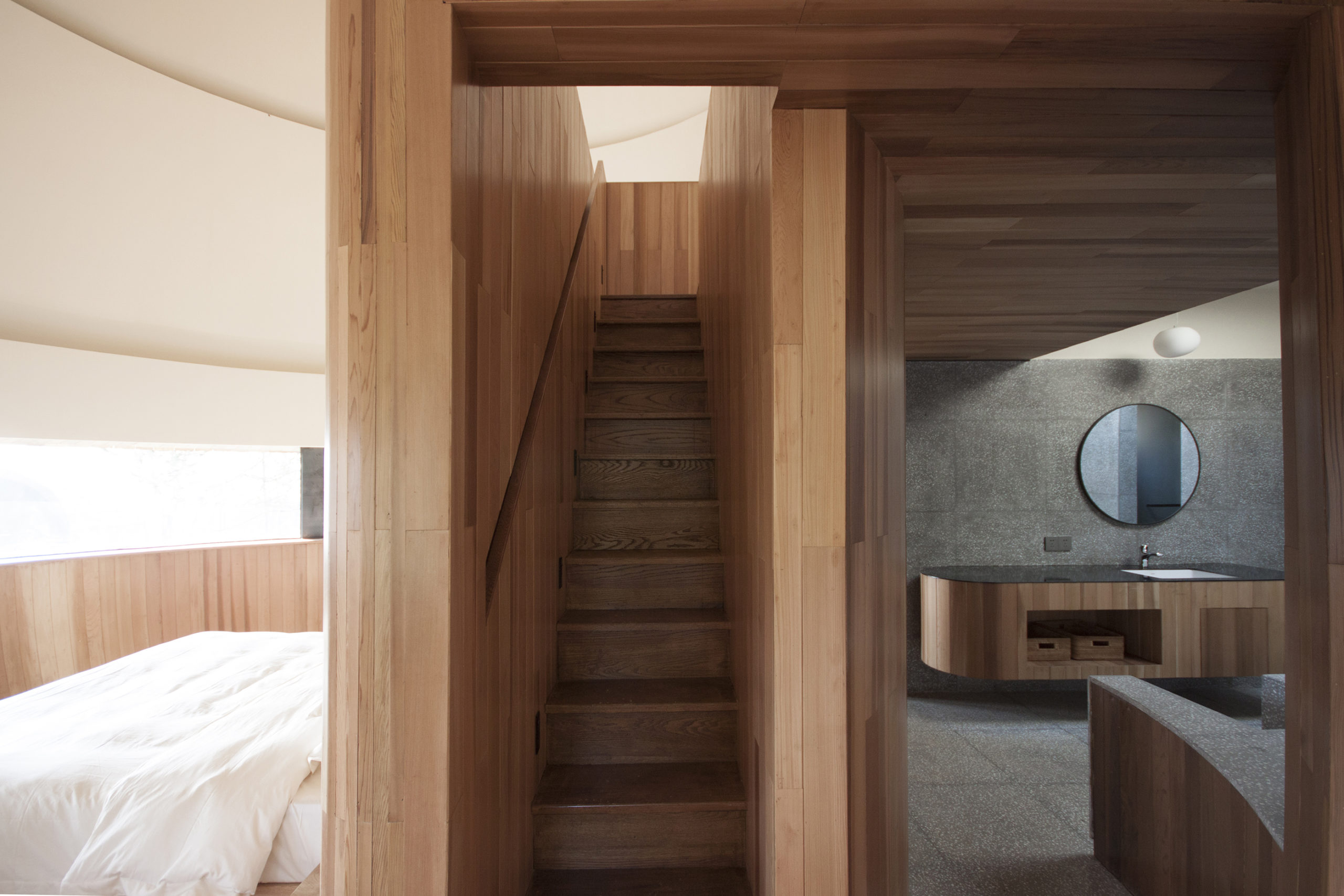 The Mushroom – a wood house in the forest by ZJJZ Atelier, Jiangxi, China

In the movie Onward, Ian Lightfoot and his family live in a colorful mushroom-like house. Before their city evolved to what is a modern-day town, the creatures all lived in primitive mushroom houses in the mountains that featured wooden textures and hues.

ZJJZ Atelier’s The Mushroom is a practical and habitable version of those homes. It is a compact structure on stilts that is made of two volumes – a conical guest room with a spectacular view of the forest and a rectangular block that houses the bathing and storage facilities. There is also a loft in the cone that can be a secondary area for children. The selection of pinewood and concrete surfaces for the structure helps it become one with its surroundings, especially as these materials change tones with the weather. 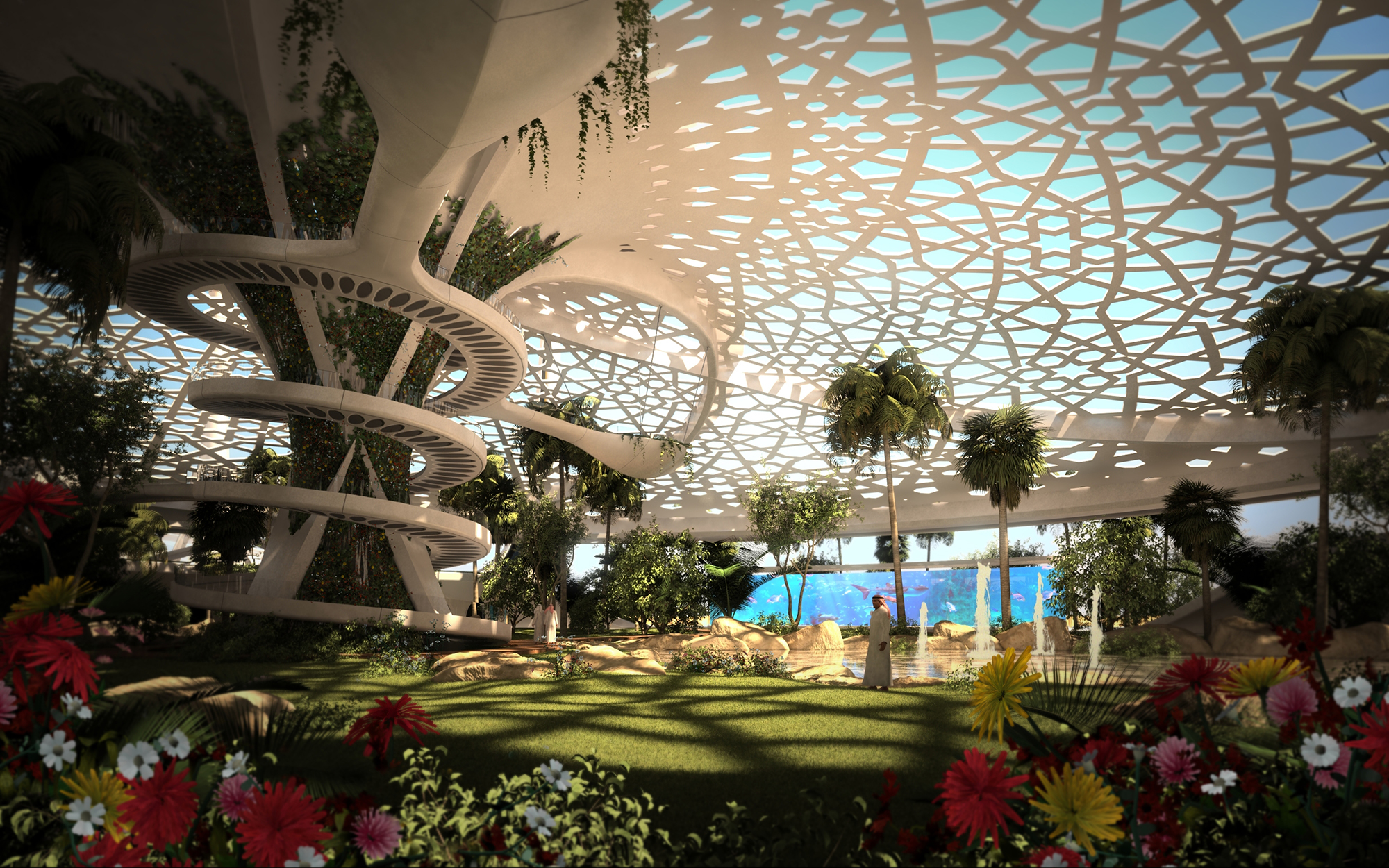 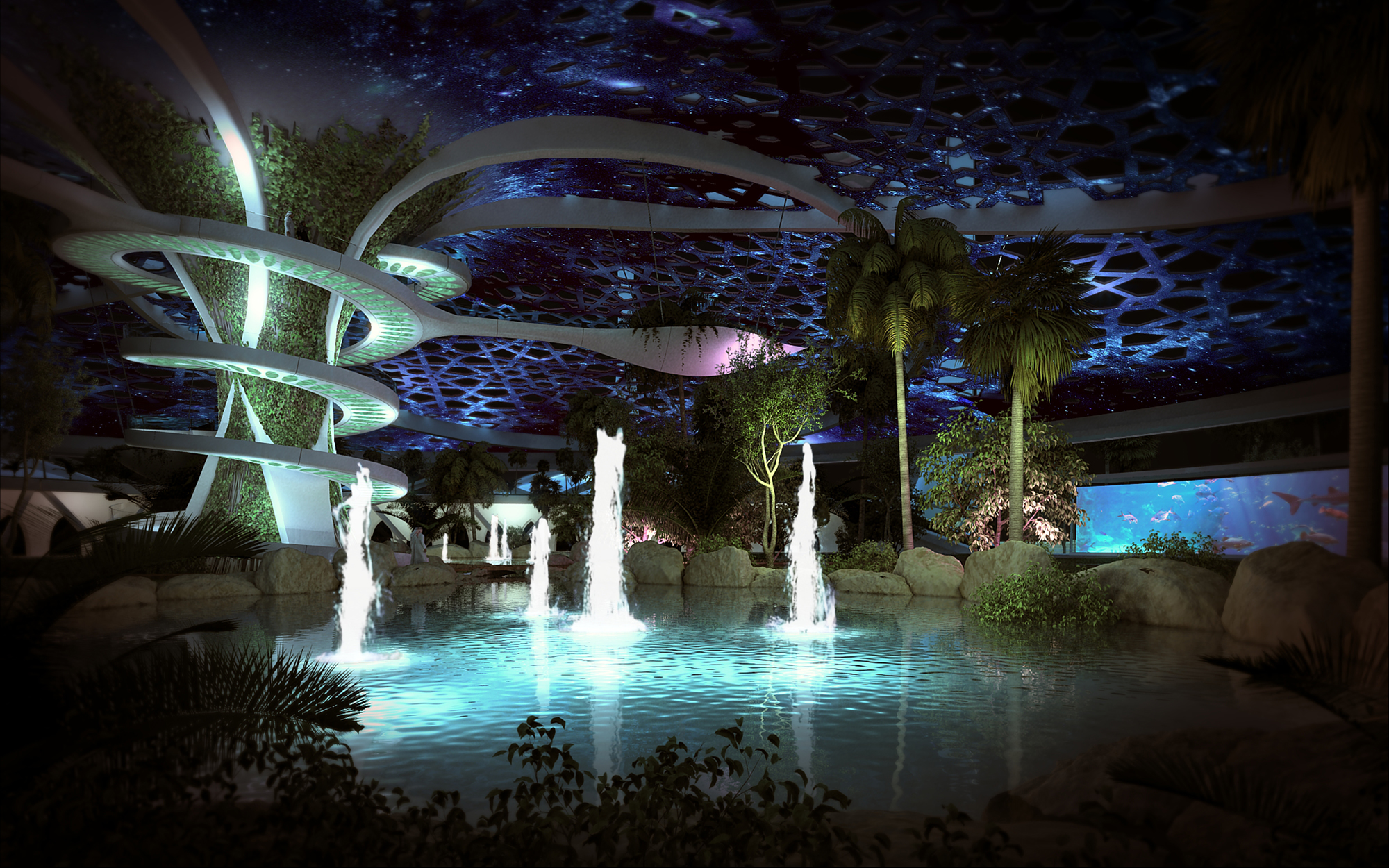 A Palace For Nature by sanzpont [arquitectura], Doha, Qatar

Ariel’s father’s palace in the animated movie was composed of imposing towers and organic forms. For the architectural enthusiasts watching the film, the underwater structure appears akin to the works of Antoni Gaudí.

sanzpont [arquitectura] created a similar fantasy above the ground as a competition entry; however, almost antithetical to the site of the underwater palace in the Little Mermaid, the Palace for Nature is imagined as a self-sustaining oasis in the middle of a desert. The design of the central dome is inspired by the native Sidra tree with a spiralling column anchoring it to the ground in the center. One can also see elements of Qatari architecture blended in with new-age parametric geometry. A micro-climate is created inside the structure with a mist irrigation system that uses water from the underground aquifer. Likewise, the outer skin of the dome and the roof contain photovoltaic panels to generate solar energy. 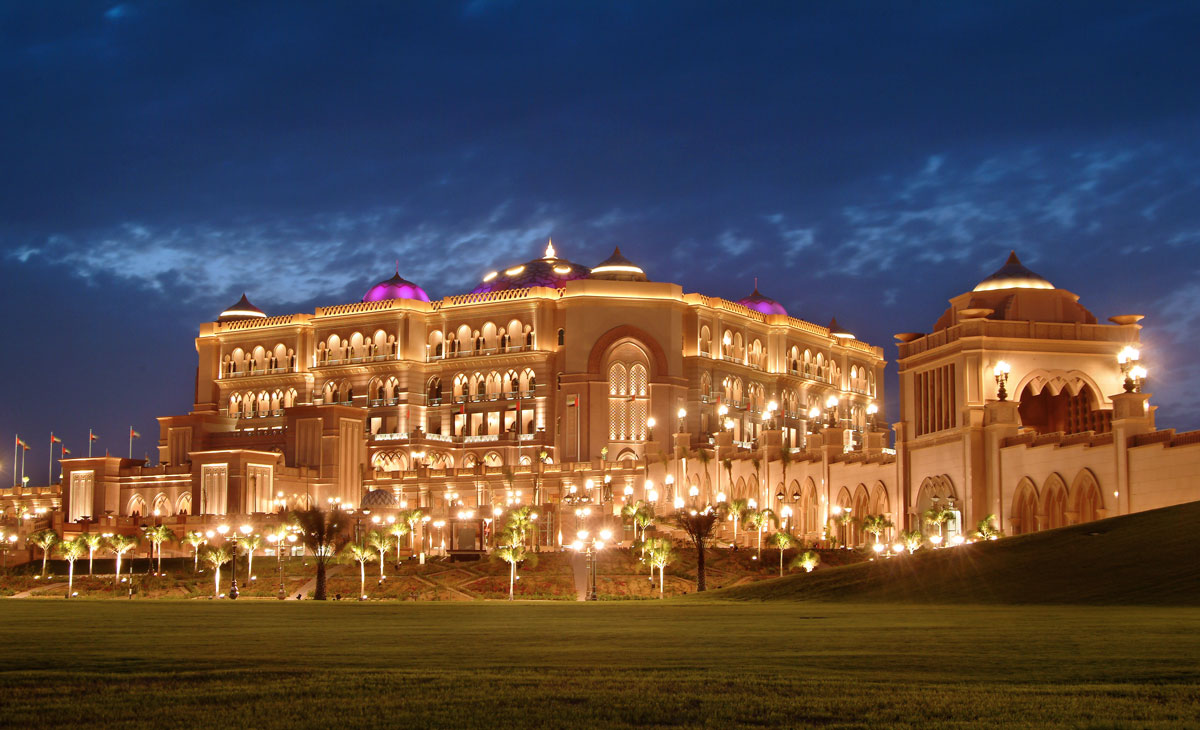 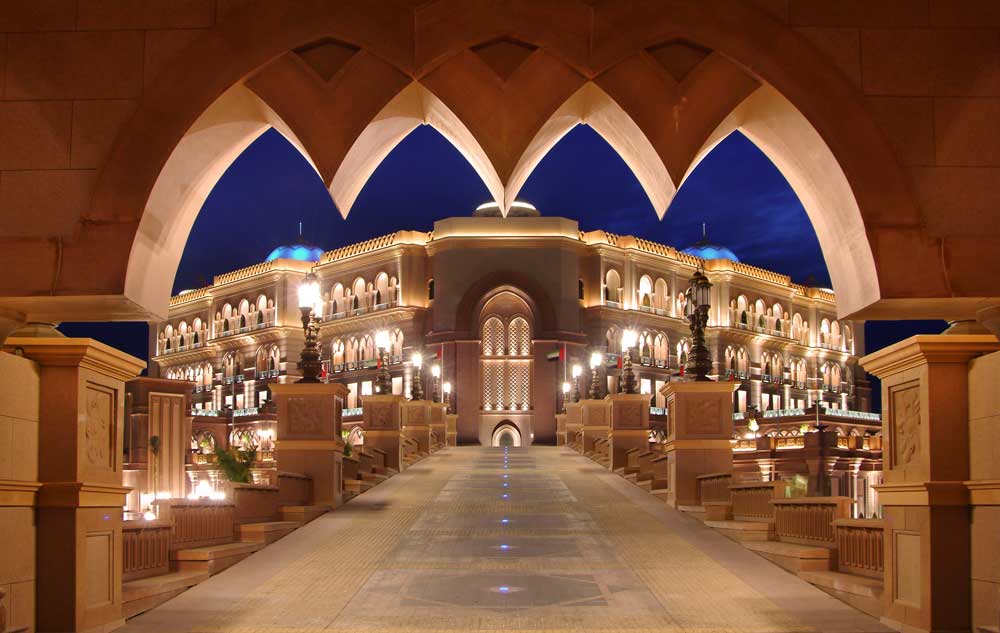 The home of Agrabah’s Sultan and his daughter Jasmine took inspiration from Indo-Islamic and Mughal architecture. Multiple minarets and exaggerated gilded domes speak of the wealth and prosperity of the Sultan.

The Emirates Palace makes a very similar statement of grandiosity. The brief was to create a large conference hotel that stayed true to the style and traditions of Abu Dhabi. Following those guidelines, the grand edifice is built using marble, granite and stone along with self-cleaning coated glass in balconies and spandrels. The firm also uses casting and etching methods to carve traditional motifs and patterns.

Did you miss our previous article…
https://thrivingvancouver.com/?p=1058