Brazilian firm Bernardes Arquitetura is a practice with roots firmly planted in generational architectural heritage, knowledge, and success. It would not be all that unsurprising to discover that the company’s founder, Thiago Bernardes, had cement, steel and timber running through his veins. Thiago is the grandson of the late Sergio Bernardes, avant-garde master of Brazilian Modern Architecture, famed for his innovation and captivating — if not slightly controversial — personal life. Thiago is also a close relative of the somewhat less polemic and equally as successful Claudio Bernardes, his father. A man remembered for his illustrious groundbreaking residential architecture, which defined Brazil during the ’80s and ’90s

The rich history of Brazilian architecture has evolved thanks to the drive, innovation and talent of three generations of Bernardes. However, it is with Thiago and his firm, Bernardes Arquitetura, established in 2012, that the twenty-first-century iteration is manifesting. With three studios under their command — Rio de Janeiro, São Paulo and Lisbon — Bernardes Arquitetura is a prolific practice with over a thousand projects in their portfolio. Their diverse team benefits from a number of collaborative partners, including Nuno Costa Nunes, Márcia Santoro, Camila Tariki, Dante Furlan, Francisco Abreu, Rafael de Oliveira and Thiago Moretti, who each brings with them an armor of disciplines and who have, alongside Thiago, labored intensely to successfully establish Bernardes Arquitetura as one of the most well recognized and most sought after South American architectural practices in the world. 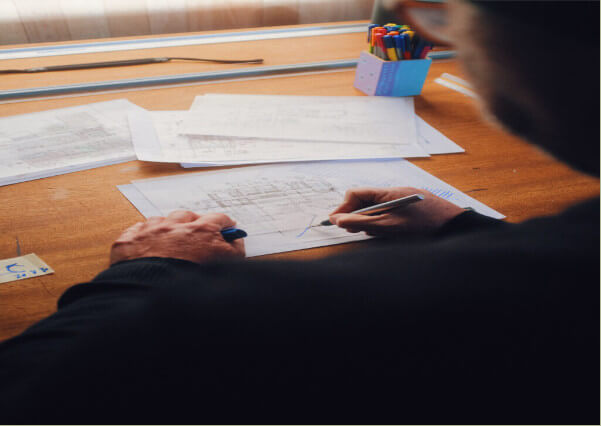 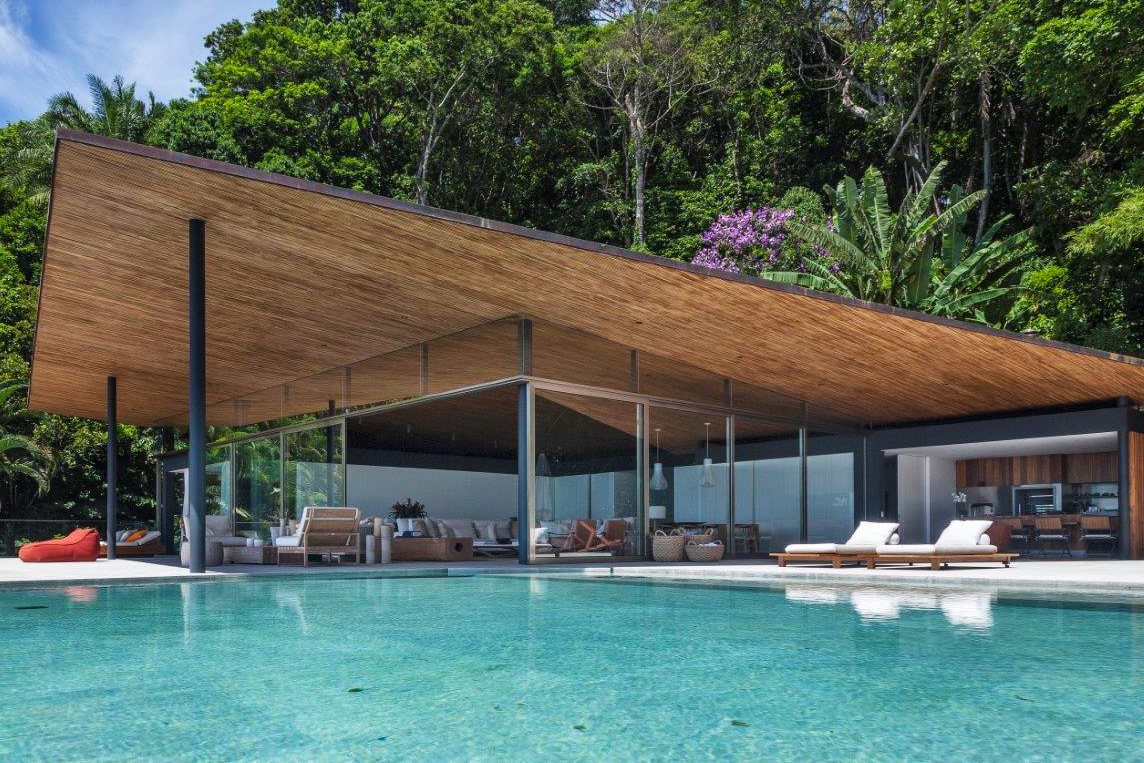 There are a rich variety of projects featured in the Bernardes Arquitetura back catalog. The firm has developed residential and commercial projects that have included hotels, restaurants, cultural institutions and educational establishments. Meanwhile, their impressive scope begins with urban landscapes, encompassing condominiums, neighborhoods and masterplans, while they have also touched some of the most remote areas of South America.

As a company with such an expansive portfolio, it comes as no surprise that the Brazilian firm has come out on top no less than six times in Architizer’s A+Awards since its first entry in 2014. As a studio with an epic history and a promising future trajectory, we wanted to speak with the team at Bernardes Arquitetura. As Architizer celebrates its 10th Annual A+Awards season, we discuss how the Brazilian firm got to where they are today and how, as a newly established practice, taking part in the A+Awards helped fuel the fire for their meteoric success. 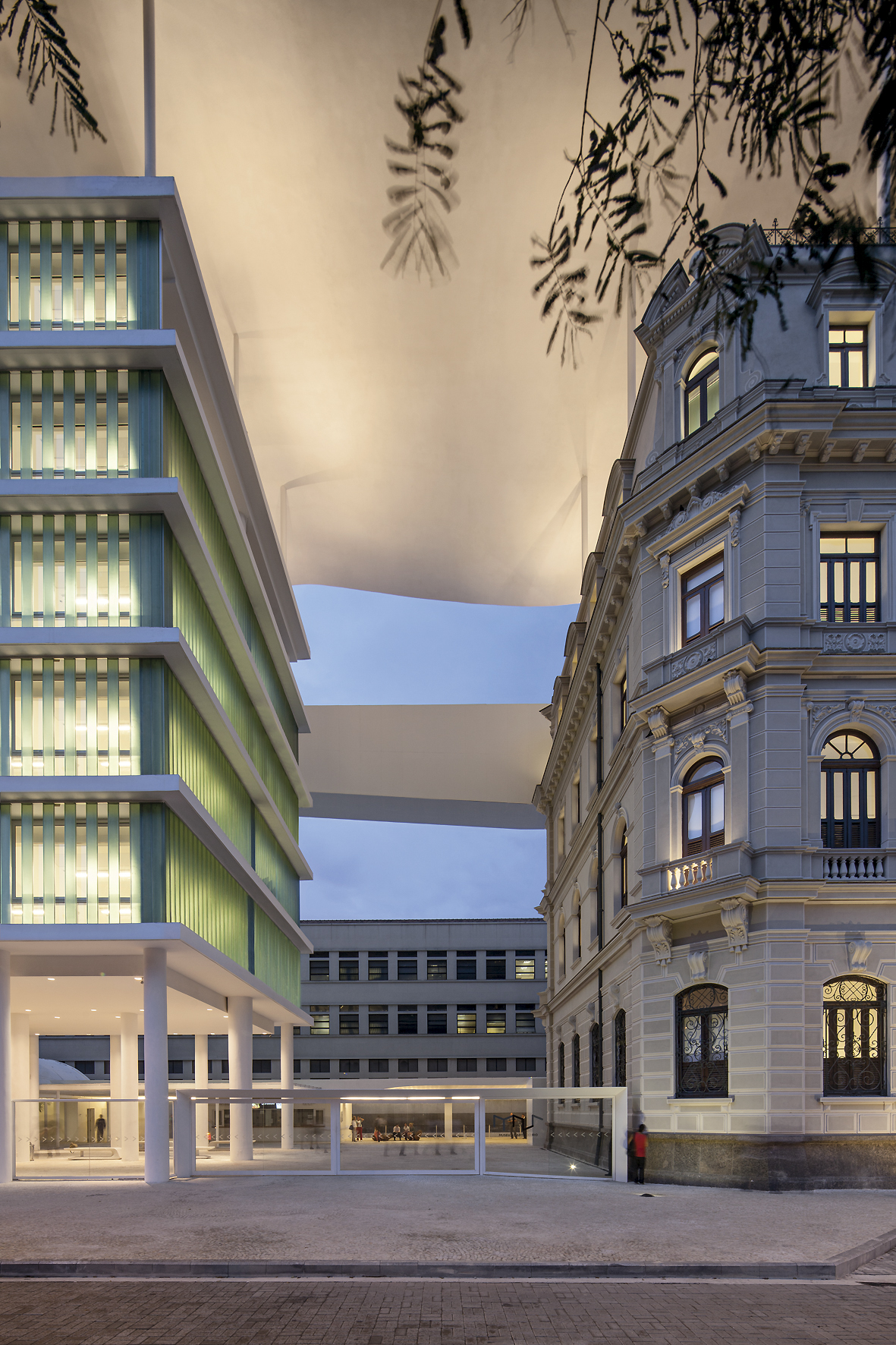 “Our first participation in the A+ Awards took place in 2014, two years after the founding of our office and one year after the conclusion of the project submitted to the award, the Museu de Arte do Rio (MAR) – Rio Art Museum, in Rio de Janeiro, in the category ‘Cultural: Museums.’ In this project, in particular, for the first time, we had the opportunity to materialize a work for public use on a large scale, which represented a challenge and responsibility for us.

Therefore, for Bernardes Arquitetura, having the project published in Architizer — a digital communication media that we admire for its fundamental role in the democratization of specialized content in architecture to the world public — and consequently submitted for the award, seemed like a great opportunity to us. To our special surprise, the project was a winner.”

The Museu de Arte do Rio (MAR) was proposed as a catalyst for change for the surrounding neighborhood. An initiative led by the City Hall of Rio de Janerio, the museum design was based on adapting three existing buildings the Palacete Dom João (1910), the Civil Police Hospital (1940) and the old Rio Bus Station. The buildings needed to be unified, and the team at Bernardes Arquitetura created a suspended walkway and a lighter feature roof that protects a suspended square. It is a project that blends both school and museum with a solid and successful academic program, and a place that strives to educate and empower its community — a theme that often makes an appearance in the work of the practice.

The team spoke of the challenges they encountered to get to that first win. “In our first A+ Awards winning project, the Rio Art Museum (MAR), we had the challenge to unite three existing historic buildings with distinct architectural characteristics in order to adapt and house a cultural complex with two uses: museum and school, respectively, in addition to leisure spaces. For each construction, we analyze different levels of preservation.

The key point in the project resolution was to establish a flow system so that the Museum and the School worked in an integrated way. Thus, in order to intervene minimally, while connecting the two buildings, as a mark of the project, we propose an abstract and aerial form. A light, fluid structure, simulating the undulation of the water surface from the sea to the horizon, at the same time modern in terms of structural calculation. This element can then be seen from different parts of the city.”

The team took the coveted Jury Winner prize for Religious Buildings & Memorials one year later. (That same year, they also won Jury Prize in the Private House (XL > 5000 sq ft) category, pictured at the beginning of this article.) The prize was awarded to a stunning piece of work that sits nestled into the rainforest canopy of a private family garden in Joá, Rio de Janeiro. The small chapel is a sacred space for family ceremonies; the paired back steel and timber structure harnesses simplicity to encourage a symbolic and poetic aura. As with their first accolade, the team used their win as a catalyst to garner further appointments that would allow them to push boundaries and challenge ideals with their creativity and innovation. 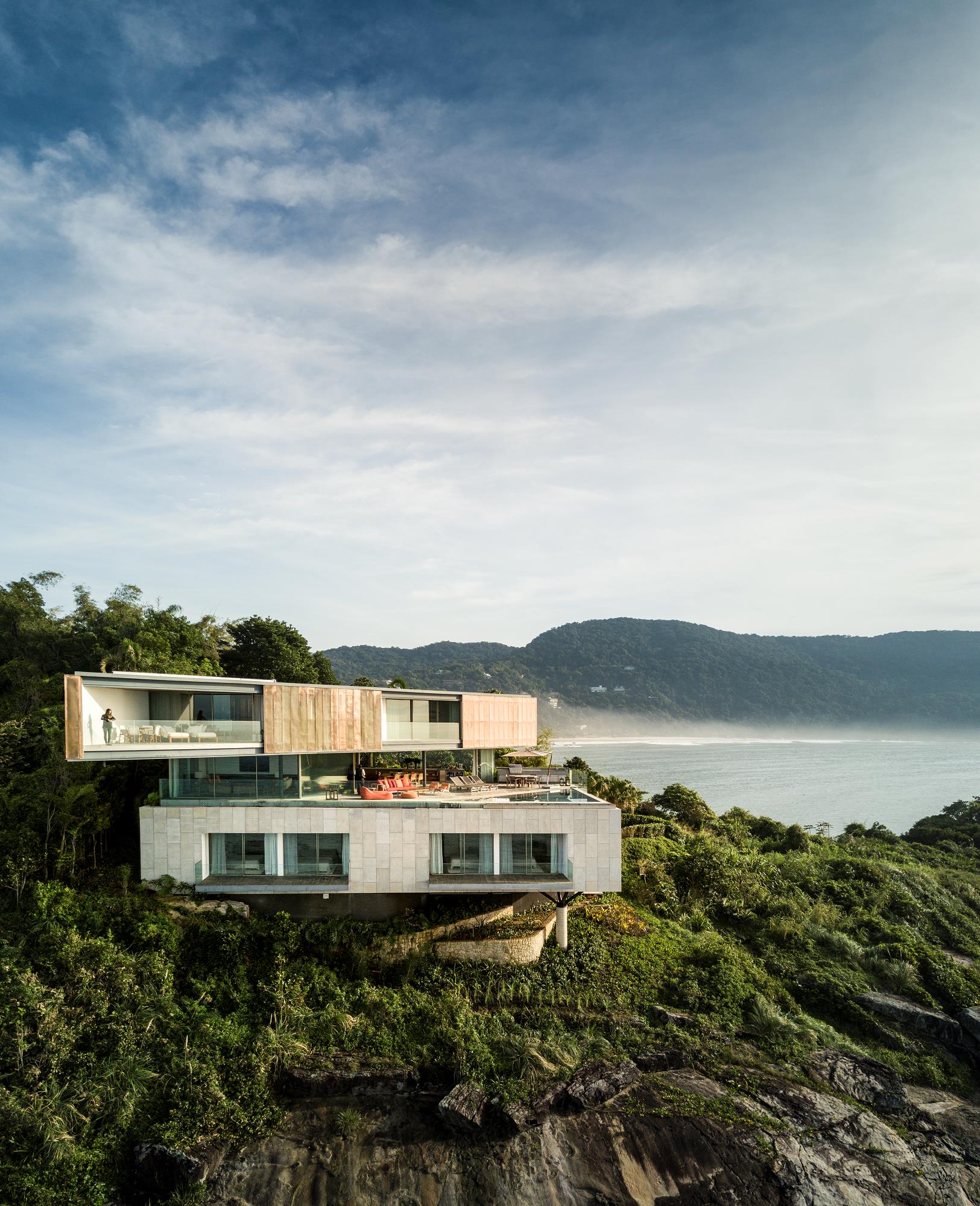 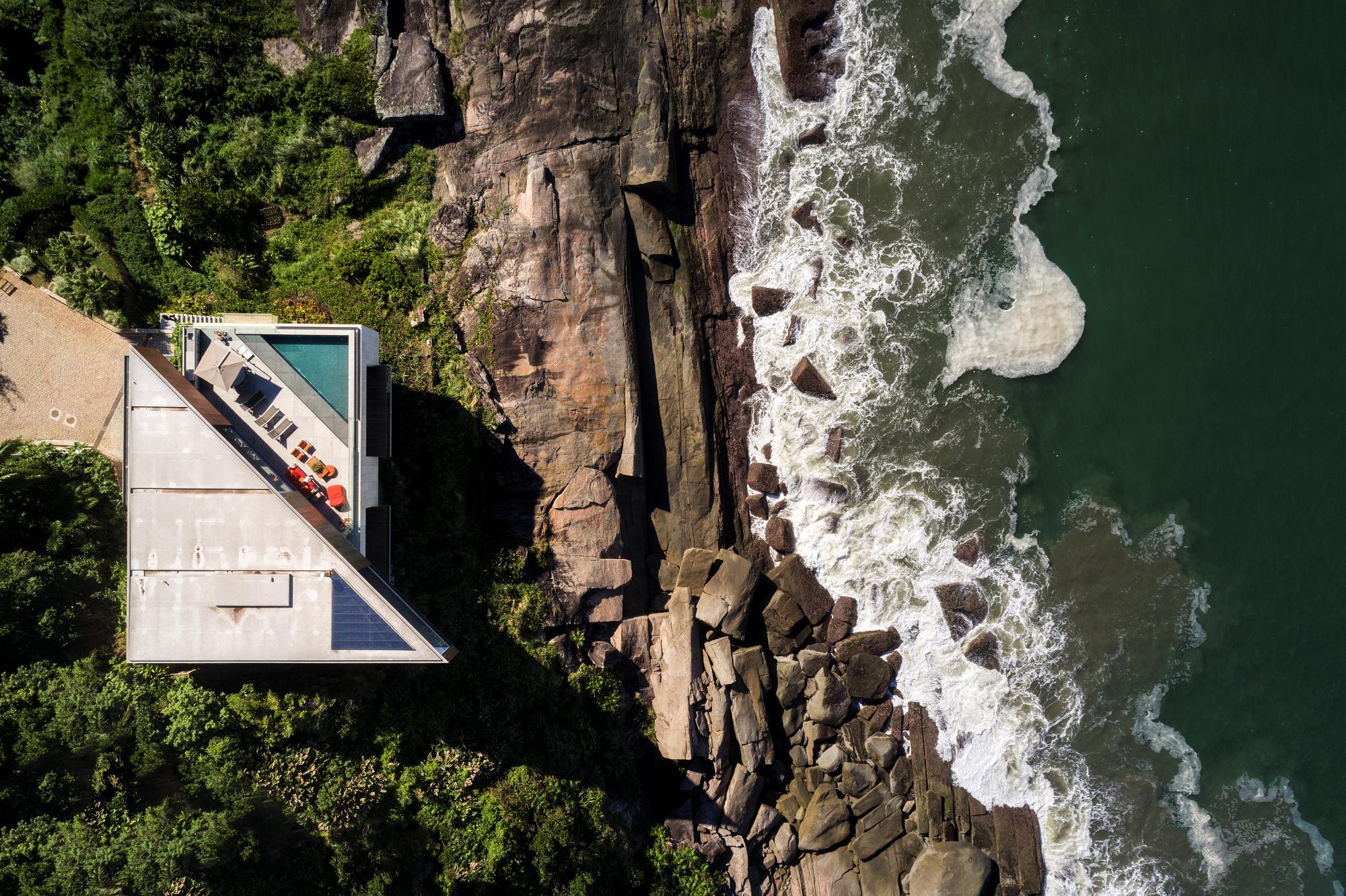 The Joá Chapel and The Rio Art Museum and just two of many exquisite projects from Bernardes Arquitetura their impressive growth over the past decade appears set to continue for many years to come. Indeed, the firm has taken home a number of A+Awards since and, when it comes to their output, shows no signs of slowing down. When speaking on what the future holds, the team was under no illusion that what they do plays a significant and influential part in the architectural development of Brazil, South America and the world.

“Receiving the A+Awards was a great honor for us, above all, because such recognition reaffirms our commitment to proposing and materializing projects that seek to unite efficient solutions with aesthetic notions, respecting the context and territory in which they are implemented.

Looking to the future, we aim to continue developing unique, special projects that value function, efficiency, quality and beauty, and that we increasingly have the opportunity to make our projects wherever our customers are, not limited by formal boundaries.”