Apart from being well-known for its conductive properties in electrical wiring and industrial uses, copper is also famous for its health benefits (the mineral, after all, is found in all tissues of the human body). People across the world have also been using copper utensils to store water or serve food. And while copper is commonly used in its raw state, alloys like brass and bronze have also remained popular for centuries.

In design, copper has been used in a variety of ways ranging from small lighting fixtures and vases to entire building façades. The metal’s earthy tone and malleable nature make it a very handy material in a designer’s arsenal. In addition to different scales, it also works with a variety of design styles – from rustic restaurants to sleek contemporary apartments. The following projects illustrate a few ways in which designers have incorporated copper into their designs in diverse ways. 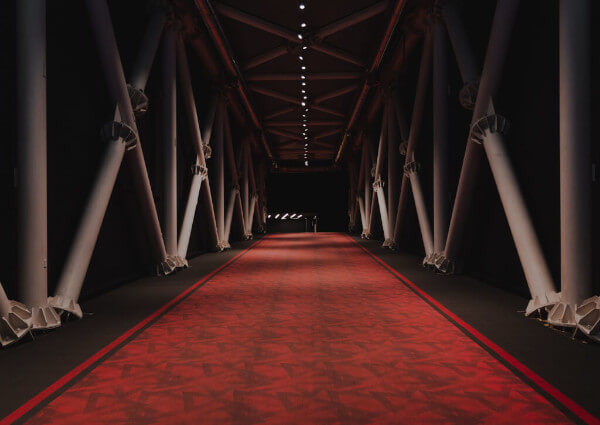 One of the easiest ways to incorporate metallic finishes is by using them as accents to highlight other materials, forms and furniture. The interior of the Hotel DAS TRIEST, PORTO Bar by BEHF Architects is a good example of this technique. The studio has used the versatile material in multiple ways in the design. In addition to the cladding on the entrance, the metal is used to create minimal shelves and gridded ceiling décor that defines and warms the space. The theme is reinforced by adding a copper finish to the travertine store bar. Wooden furniture lines the interior, echoing the warm tone of the striking copper accents. 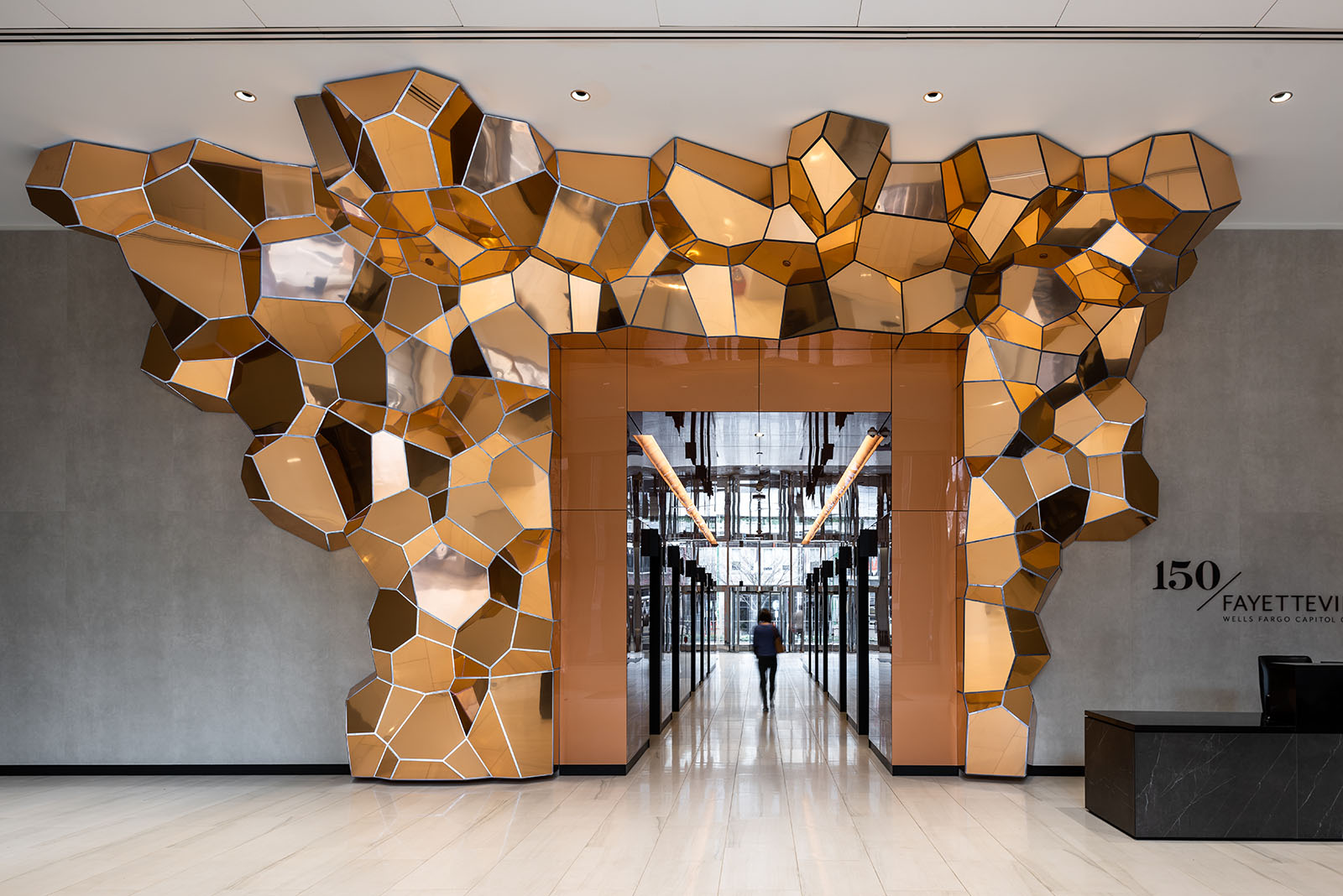 From windows to mirrors to shiny stone walls, people are often tempted to glance at their reflections as they walk by glossy surfaces. Reflecting this human tendency, a copper-clad entryway is bound to be a crowd stopper. With their sculptural doorway in Raleigh, North Carolina, SOFTlab proves exactly this. The grand entrance is created by putting together copper-toned composite panels to resemble crystalline forms in nature. An organic rock-like mass is created by joining 70 flat-cut black aluminum pieces and then adding the copper panels on top using high-strength magnets. Taking this a step further, LEDs are placed in the seams to breathe life into the structure as they create reflections on the metal surfaces. 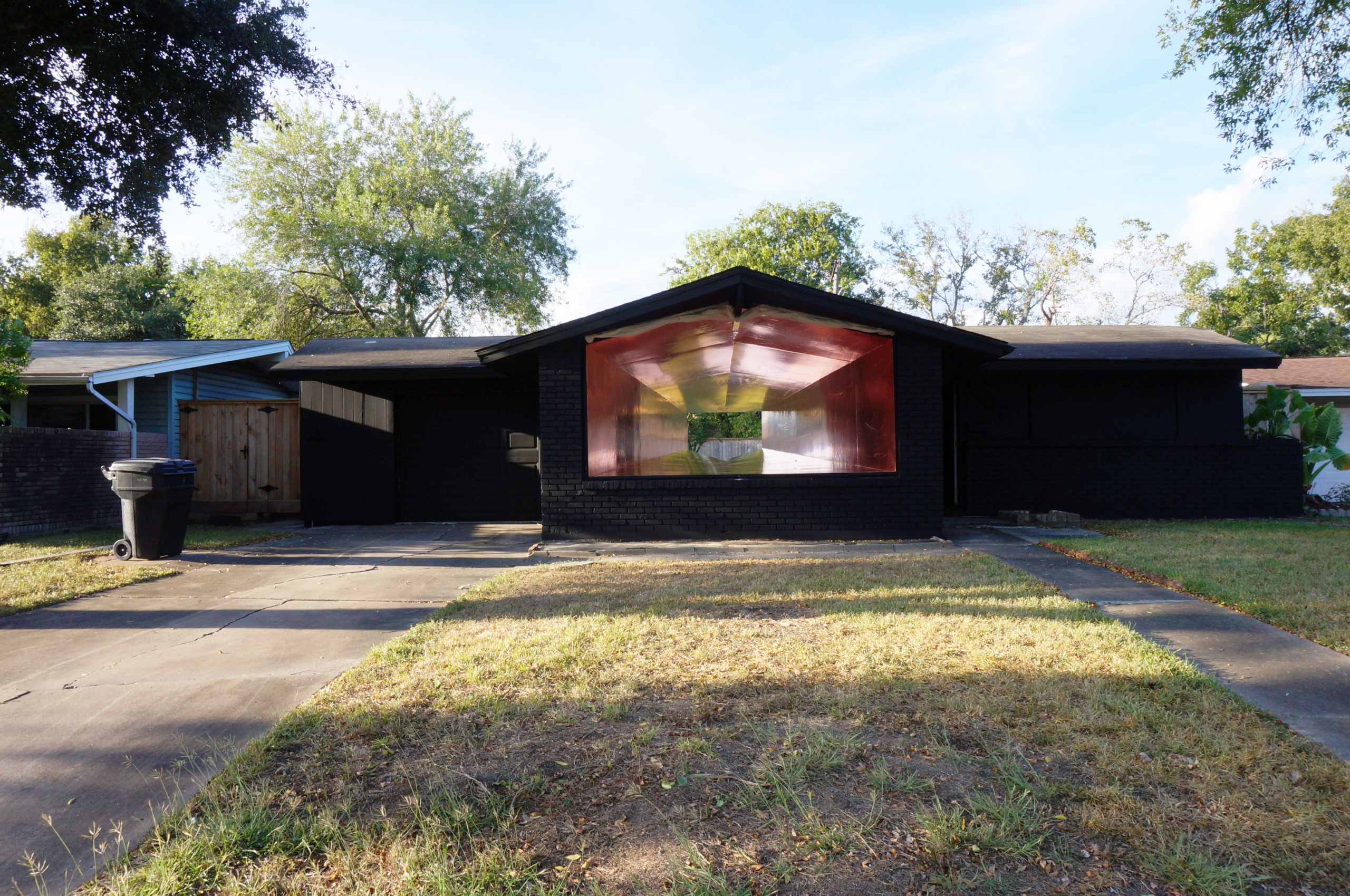 The warm tones of copper often appear brighter when placed next to darker colors. Pairing it with hues like black or navy blue also tones down the reflectiveness of the metal, making it more usable. Havel Ruck Projects made a house-shaped cupric void in a home in Houston, Texas. As it moves along the length of the home, the void takes a 180-degree twist to form the shape of an inverted pitch roof house on the other end. The plywood walls of the void are coated with copper foil to capture and reflect sunlight inside. Here, the black façade of the house balances this illuminated core and creates a strong visual contrast. 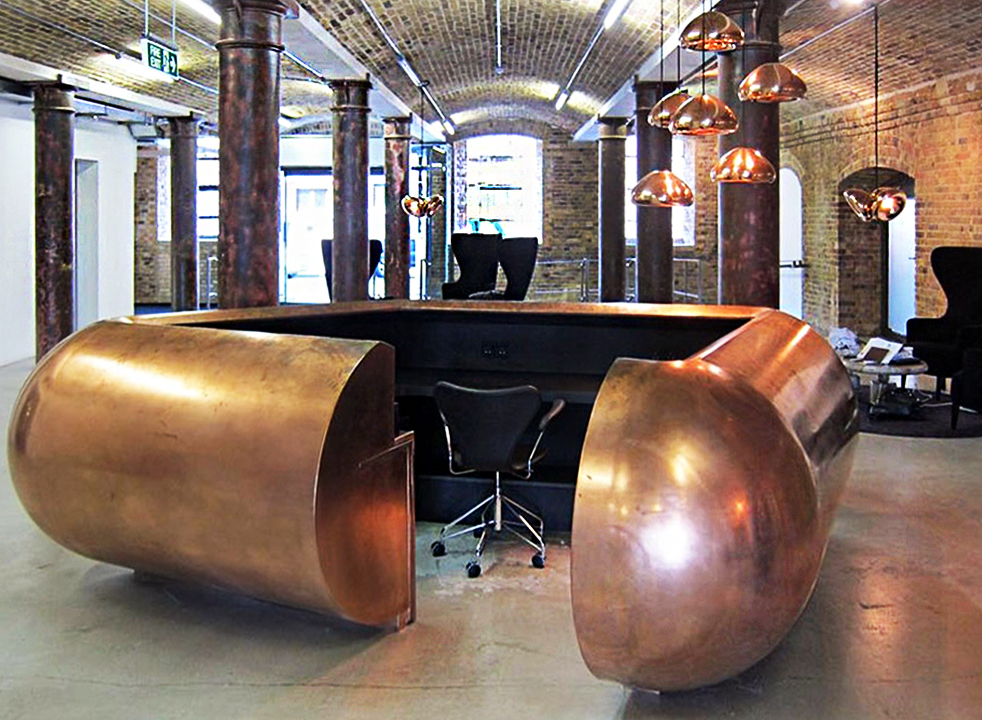 Copper can be used in more than just ceiling panels and lighting fixtures. Take for example this reception area in London, designed by Mizzi Studio. The stunning space features a statement desk covered entirely in copper. The malleability of the metal allows it to be bent into a curved cocoon that acts like a cubicle. The surface of the desk was left untreated to integrate it with the exposed finishes in the entire space. 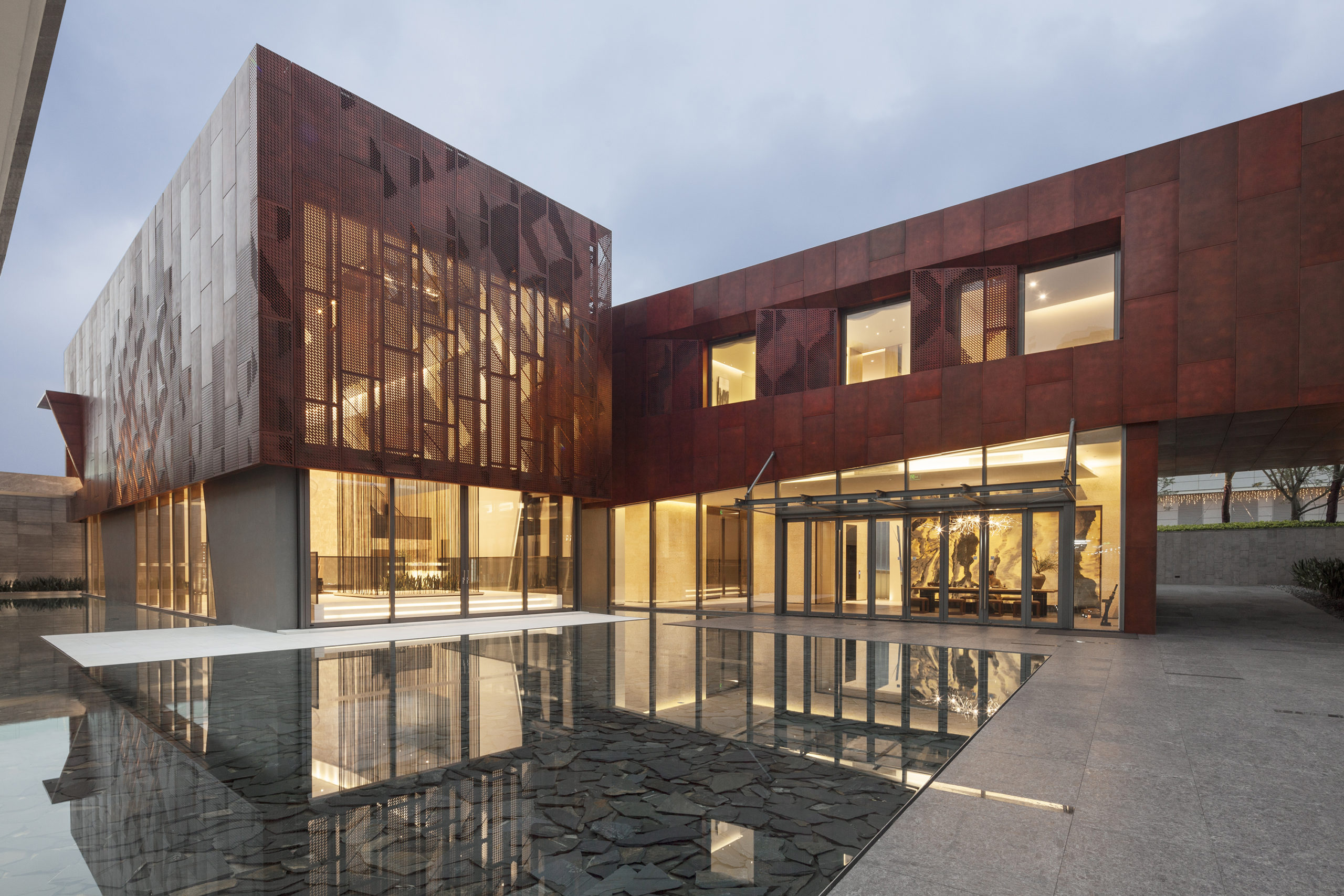 Although less common, architects are also incorporating copper in exterior surfaces. Highly malleable copper sheets can be curved, folded or perforated to create different volumes and forms. Shenzhen Bay Gallery by Studio Link-Arc, LLC features a dramatic metallic façade with several openings and patterns. The perforations in the façade help control the amount of light that enters the building while also creating interesting shadows that dapple and define the interior space. 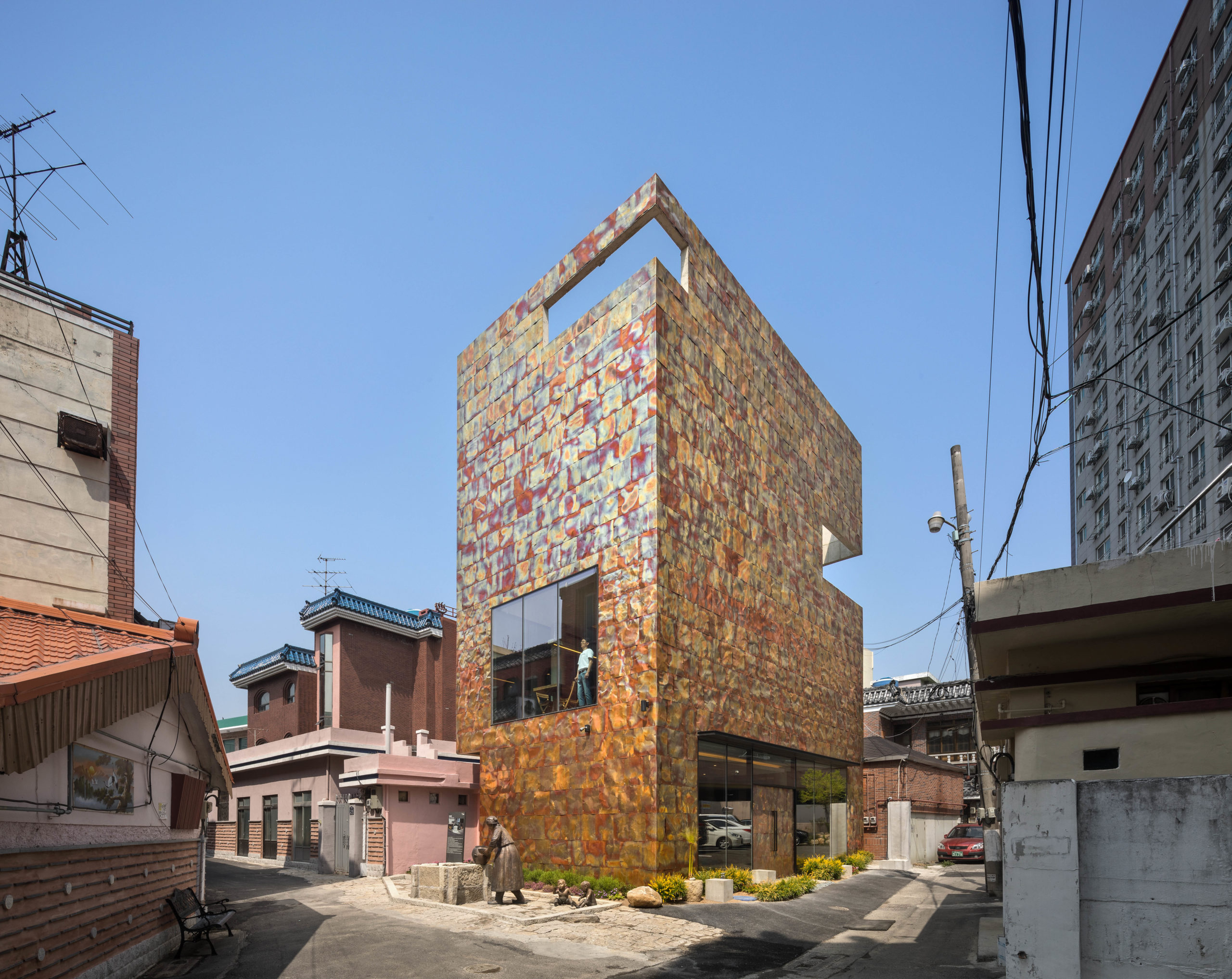 Apart from use in their natural state, metal surfaces can also be treated in different ways to create interesting effects. For example, they can be painted or chemically treated to create a weathered appearance. This effect can be a step further, as in the case of NOXON by On Architects Inc. by scorching copper elements. These plates on the external walls were beaten by hand and then fire-treated to create unique patterns, keeping in mind that copper will oxidize with time and further enhance them. The aged appearance of the building is also a nod to the historic character of the surrounding neighborhood. 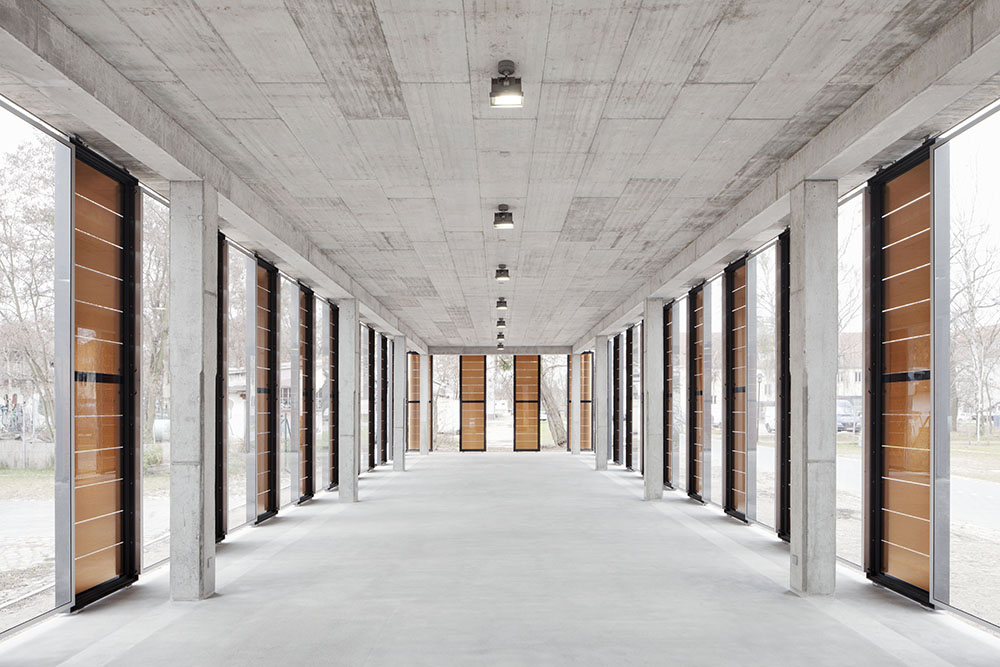 Photovoltaic panels can be more than just an energy-generating element. O&O Baukunst created the Potovoltaric Pavilion Potsdam as an experimental design that incorporates such panels. The photovoltaic panels held in steel frames make up the elevations of the pavilion. The copper backs of these panels are visible inside, standing out against the pale floor and ceiling. 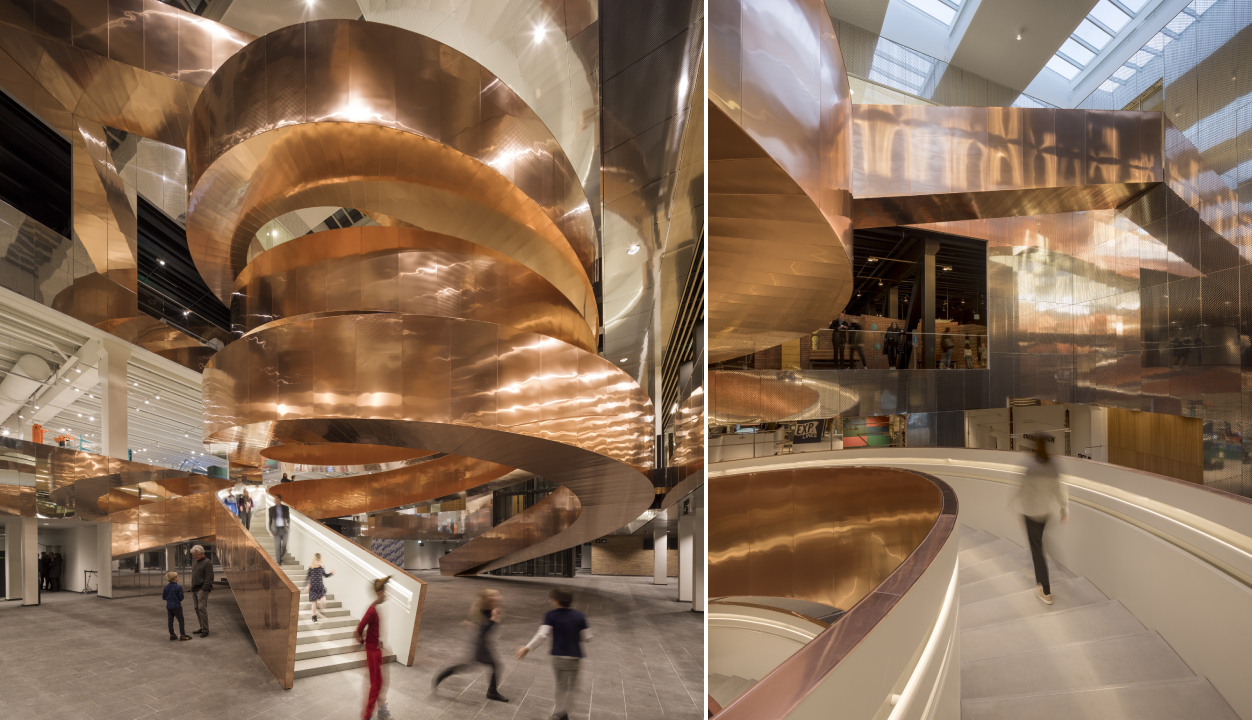 A central staircase often becomes a focal point in any space. But it attracts even more attention when it is covered in gleaming orange metal. The large helix staircase in CEBRA’s design Experimentarium fills the central void in the science center, connecting its four floors. The DNA strand-shaped copper staircase hints at the scientific nature of exhibits within the space both due to its form and material.

Plain metallic surfaces can add a dash of glamour and complexity to minimal or monochrome interiors with little effort. As an added bonus, these details also reflect light, making a space look cozy or spacious. In Copper Cube Haus, DIG Architects created a central kitchen block and covered it entirely in copper. This box adds warmth to the space, as it intensifies the cozy effect created by warm-toned lights, and helps separate the living area from the other functional spaces. The theme is repeated in the bathroom by using copper accents in the black and white bathroom.