Designs of the Decade: The World’s Best Architecture Visualizations From 2012 To Today

Get your work published internationally this year through the 10th Annual A+Awards! The Main Entry Deadline is December 17, 2021. Click here to start your entry today.

Models and renders are one of the most important components of a design package. The way a project is represented can be a big deciding factor while choosing which design wins a competition or a contract. Moreover, the act of visualization itself is also an important part of the development process for architectural ideas. Indeed, visualizing conceptual projects allows some studios to express revolutionary ideas for city planning, residential design and cultural hubs.

Architecture visualization has come a long way from rudimentary SketchUp models and handcrafted physical models. Computational design and 3D printing have made it possible for architects to create previously unimaginable forms, challenging the long-standing ideas of what various typologies should look like. Photorealistic renders also help imagine the true nature of spaces.

At Architizer, we celebrate architecture as a process, rather than a product. Over the past decade, we have been acknowledging unbuilt designs for their ingenuity and risk-taking efforts with A+Awards categories like Architecture +Models & Rendering. We’ve rounded up the best of these award-winning projects, allowing you to discover how much the field has changed over the past decade. 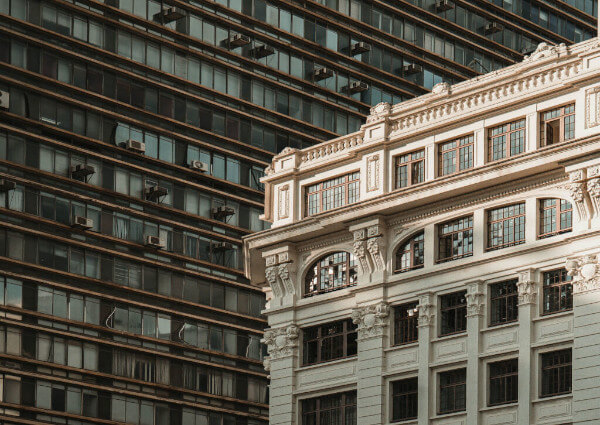 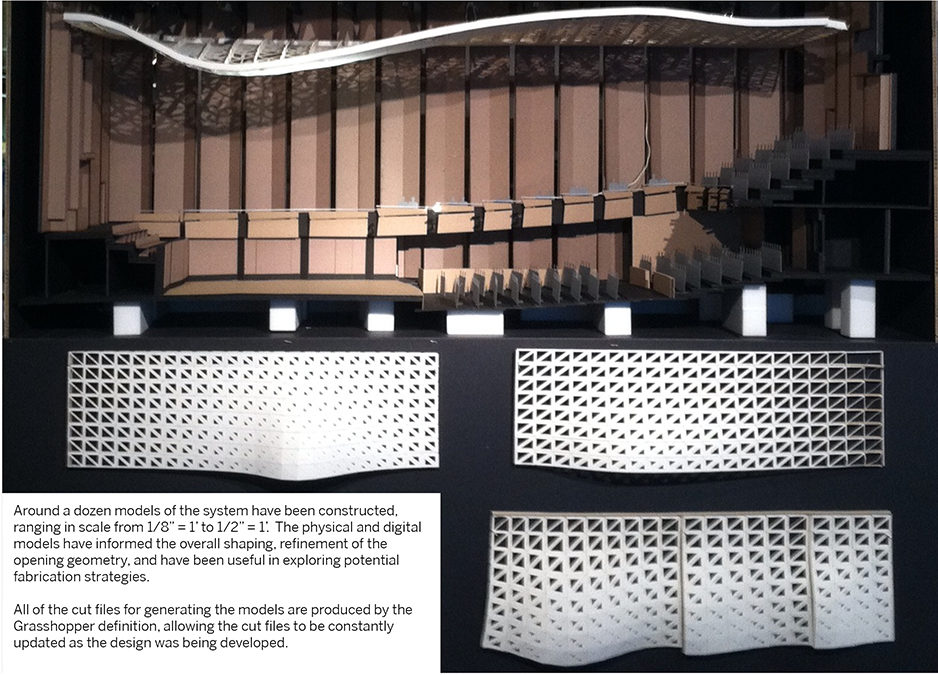 The 700-seat concert hall proposal sits within a six-story structure. The use of parametric modeling helped devise 946 unique panels that incorporate acoustics, lighting and mechanical design, audio and visual design and fire protection — all integrated within one unified system. A 3-axis CNC mill was used to fabricate components for testing purposes.

It is exciting to see how far architecture visualization has evolved in just a few years. Parametric design and hyperrealistic renders might seem like a norm now, but they were still not as advanced in 2013, as is seen in the overall shapes of the forms, which are angular and geometric rather than fluid. This design takes a very advanced approach to assessing complex problems and providing highly functional solutions. 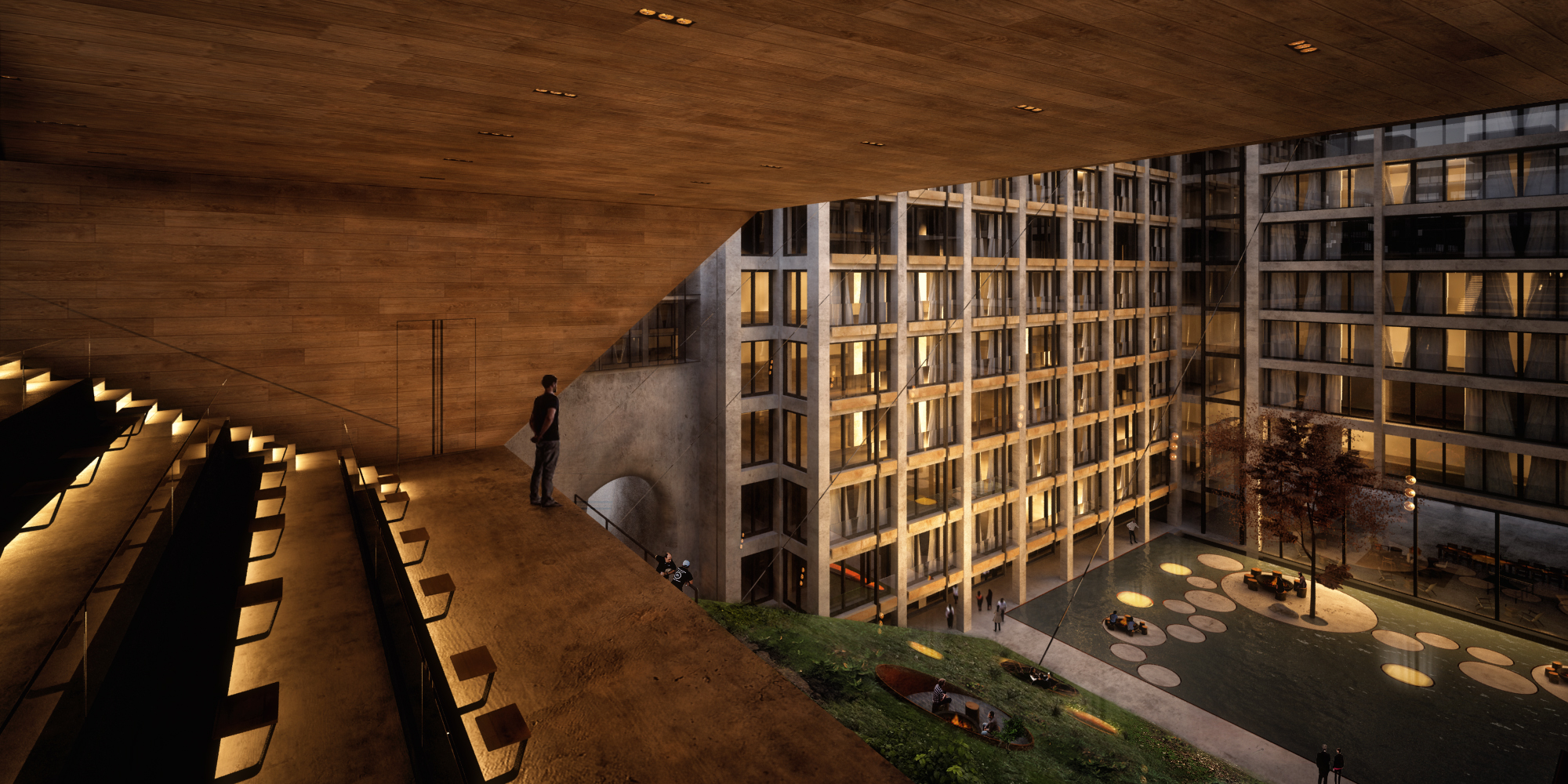 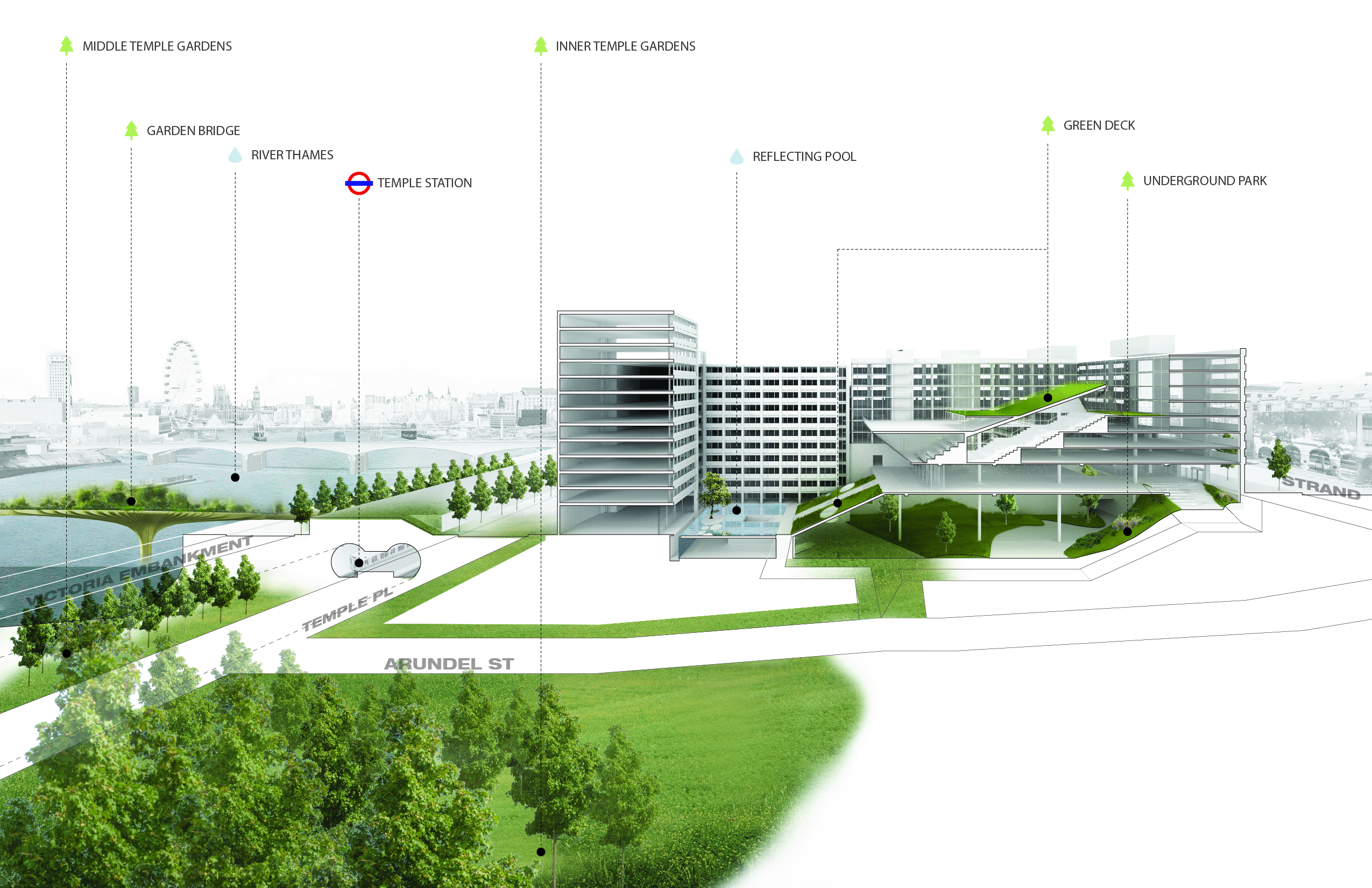 Raw concrete is the star of the show in the reimagination of an abandoned Brutalist edifice in Central London. The studio added a slope right in the middle of the structure to break up the parallel horizontal lines. This diagonal plane starts from the ruins of the Roman bath underground and navigates through a garden, the building lobby, circulation corridor right, going straight to the top. The surface also creates multiple public spaces within the building.

While we can see a lot more lifelike material rendering, one can still easily tell that this is a computer-generated image. But that does not take away from the nearly tangible effect of the spaces in the pictures. This structure unifies a contemporary design language with robust tones and textures that celebrate its original identity. 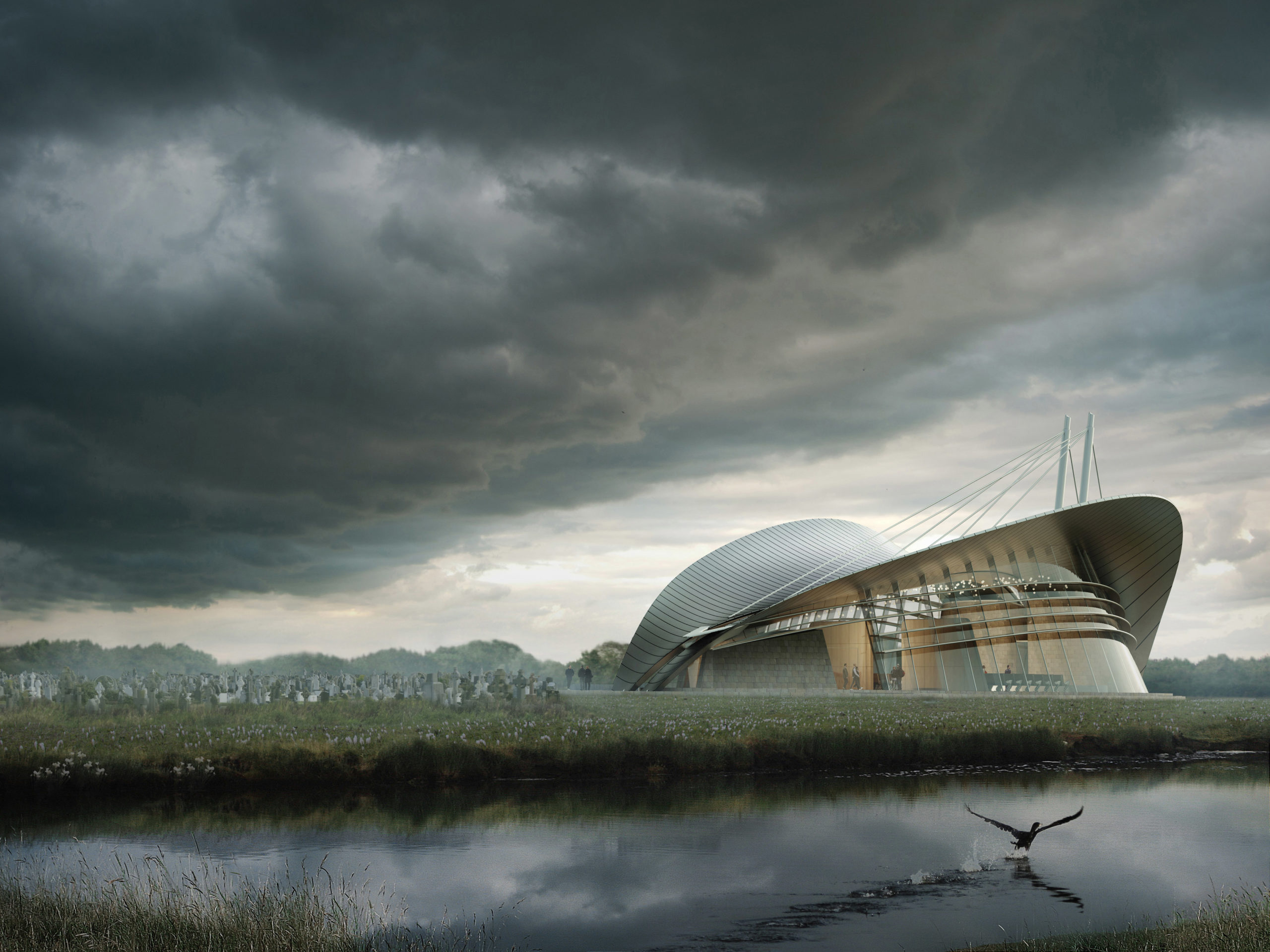 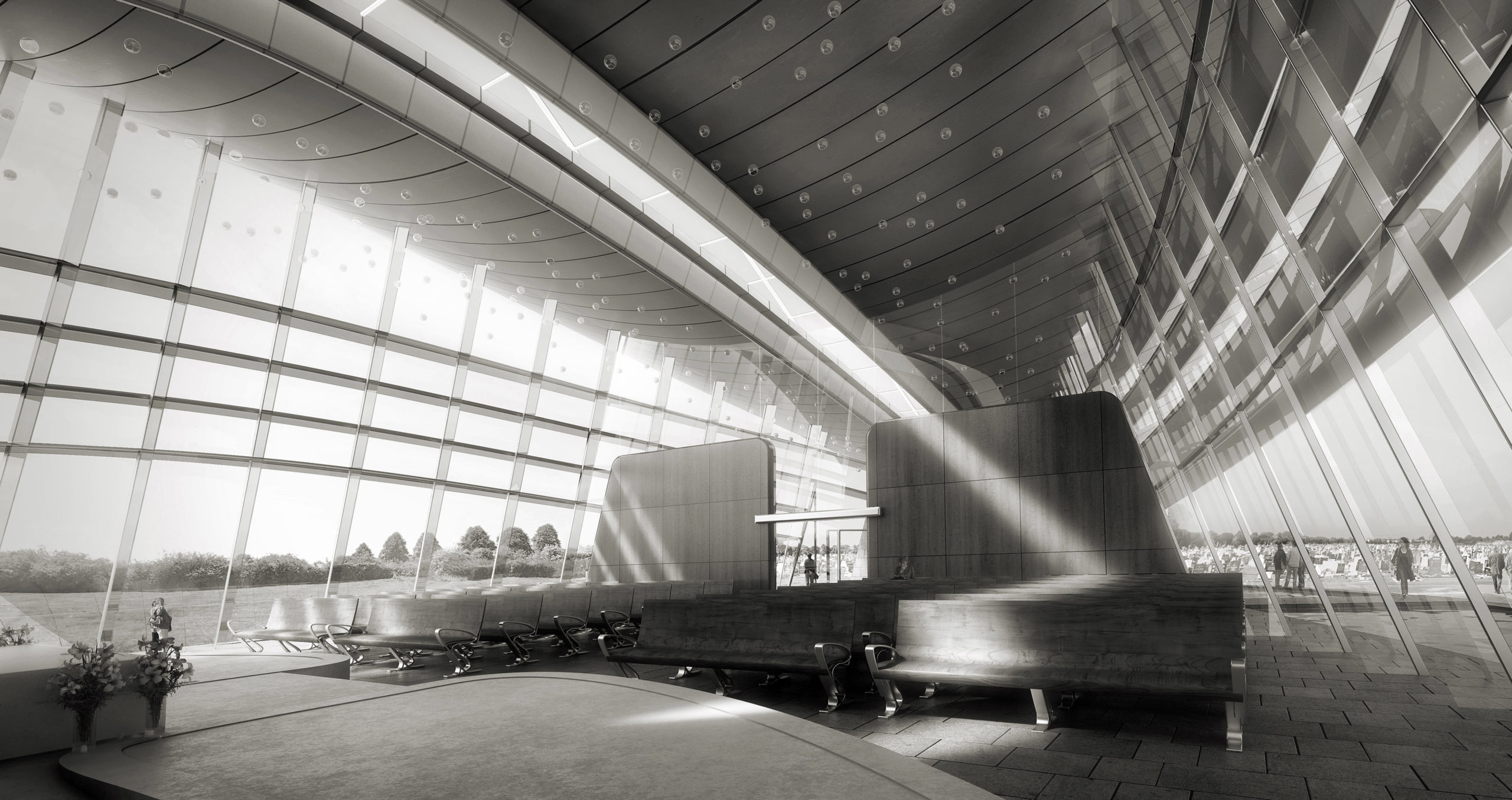 The curved structure of this chapel, surrounded by three reflecting pools, is meant to look like a petal of an Easter lily floating on a pool of water. Large glass panels cover the north and south façades to bring in ample natural light into the space. The upper windows in these walls can be opened for natural ventilation. Furthermore, the roof is also designed to release warm air. 232 suspended glass spheres inside the building are a nod to the 232 casualties of the uprising in 1916 and create a medley of floating lights that is visible from the outside.

Over the years, we have seen the increasing use of large, column-free domes or organic forms made possible by advanced engineering and material technologies. Santiago Calatrava’s work is a great example of this style. This particular design is a very unique take on a traditional chapel. Its overall geometry is more likely to be associated with a corporate entity or a museum space than a cemetery chapel. The tones used in the renders also reflect the architectural atmosphere — one based around a melancholy experience that is rooted in the past. The chapel is meant to be a relatively quiet place meant for introspection. 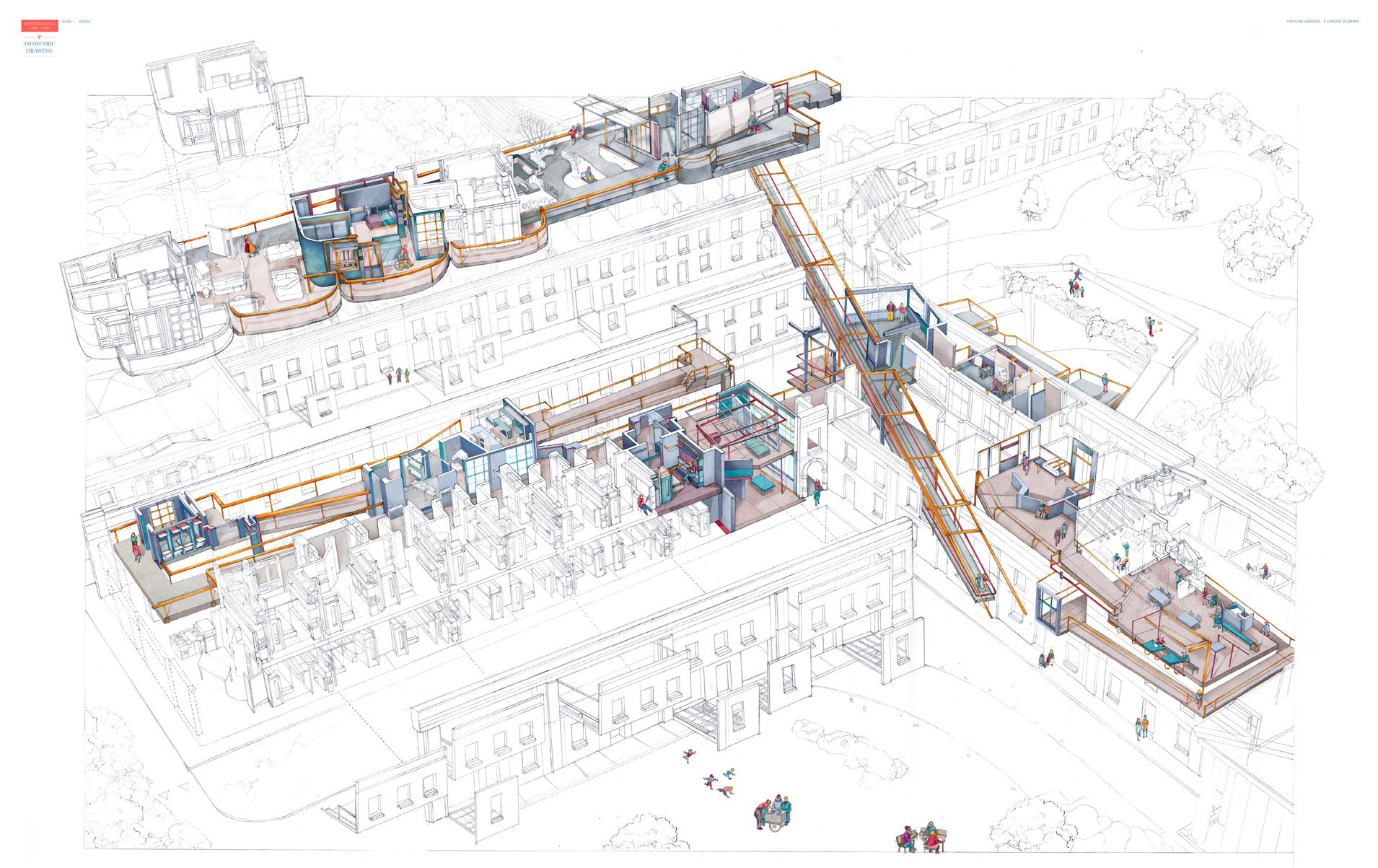 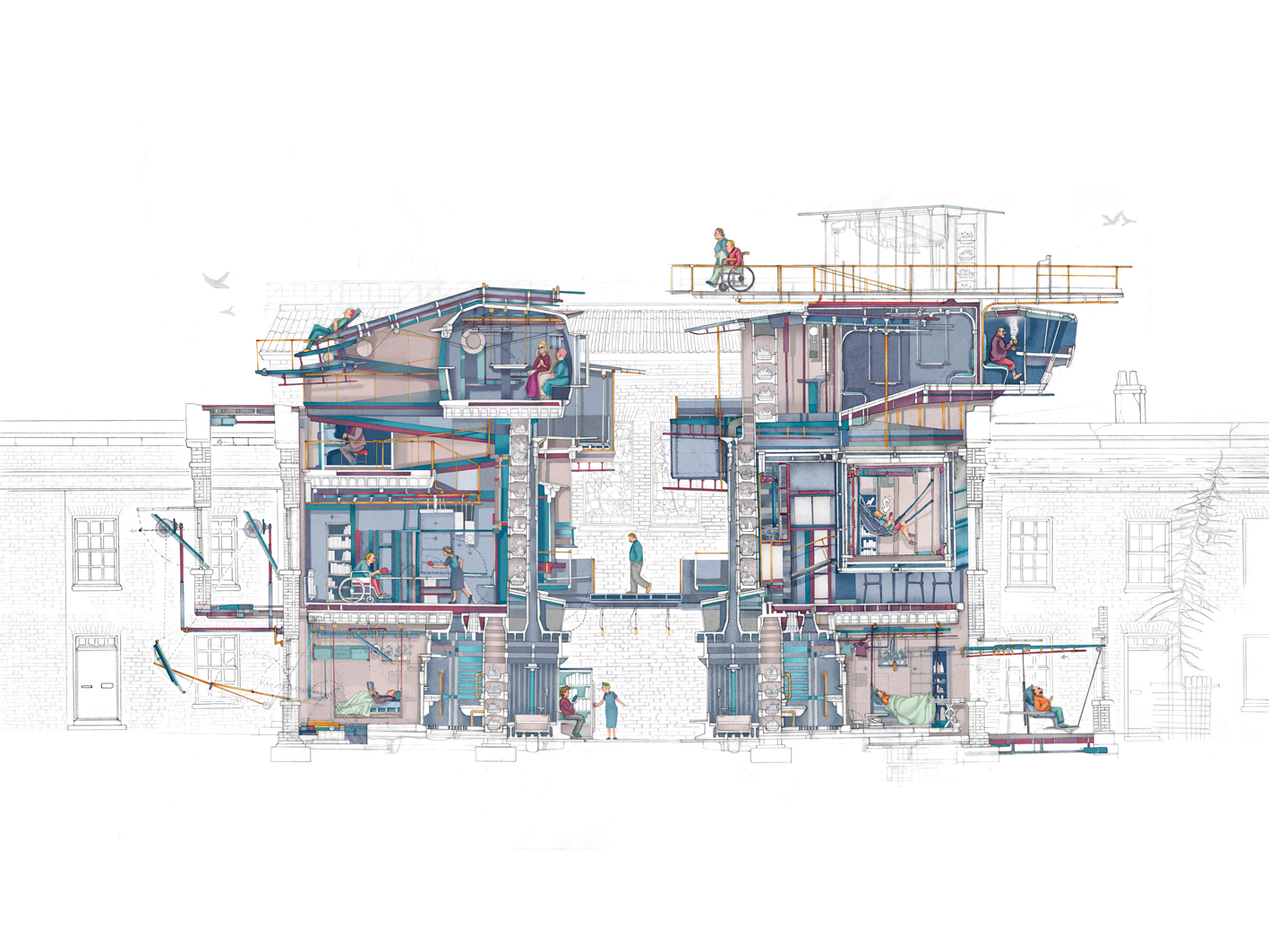 This artful proposal aims to improve the lives of terminally ill adults and children. It also creates awareness about the fact that people in hospice care facilities actually live longer lives. The main driver of this design is flexibility. The façade is retained to preserve the character of the neighborhood and the interior spaces have movable parts to accommodate changing social and private spaces as per the patients’ needs.

End-of-life care is a difficult subject to approach, but it is slowly becoming an important conversation — especially over the last couple of years. Unfortunately, there isn’t much awareness regarding palliative care in design education. Architects and designers have the ability to make a huge impact on patients with limited life spans by developing spaces that are not only functional but also add value to their lives. This design represents an exemplary step in that direction. 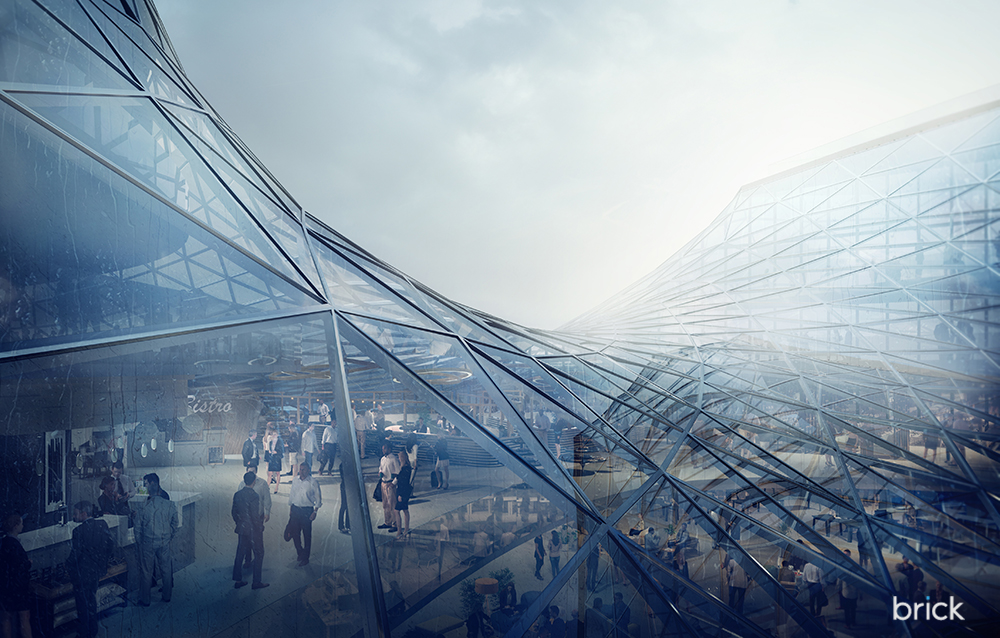 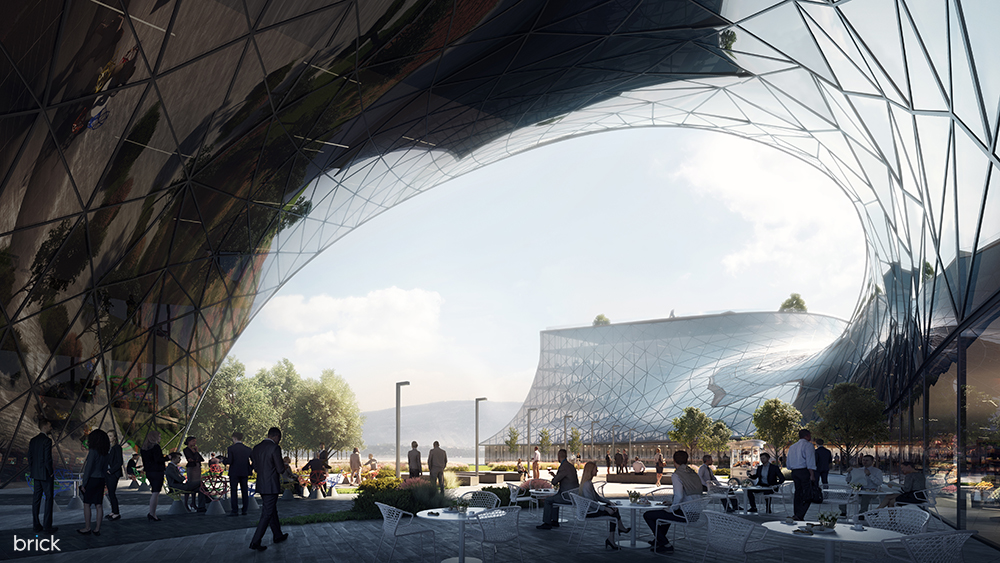 Brick Visual created these masterful renderings for a conceptual design by Swiss architecture firm Favre+Guth. A continuous plane of glass twists and curves to create a roof, walls and canopies. Triangular metal frames help divide and support this massive form.

One can see the gradual evolution of forms in commercial or public spaces. Lineal walls, box-like forms and conventional construction materials are being pushed aside in favor of glass facades and curvilinear designs. This design has a sculptural and fluid quality to it and it pushes the boundaries of structural engineering. 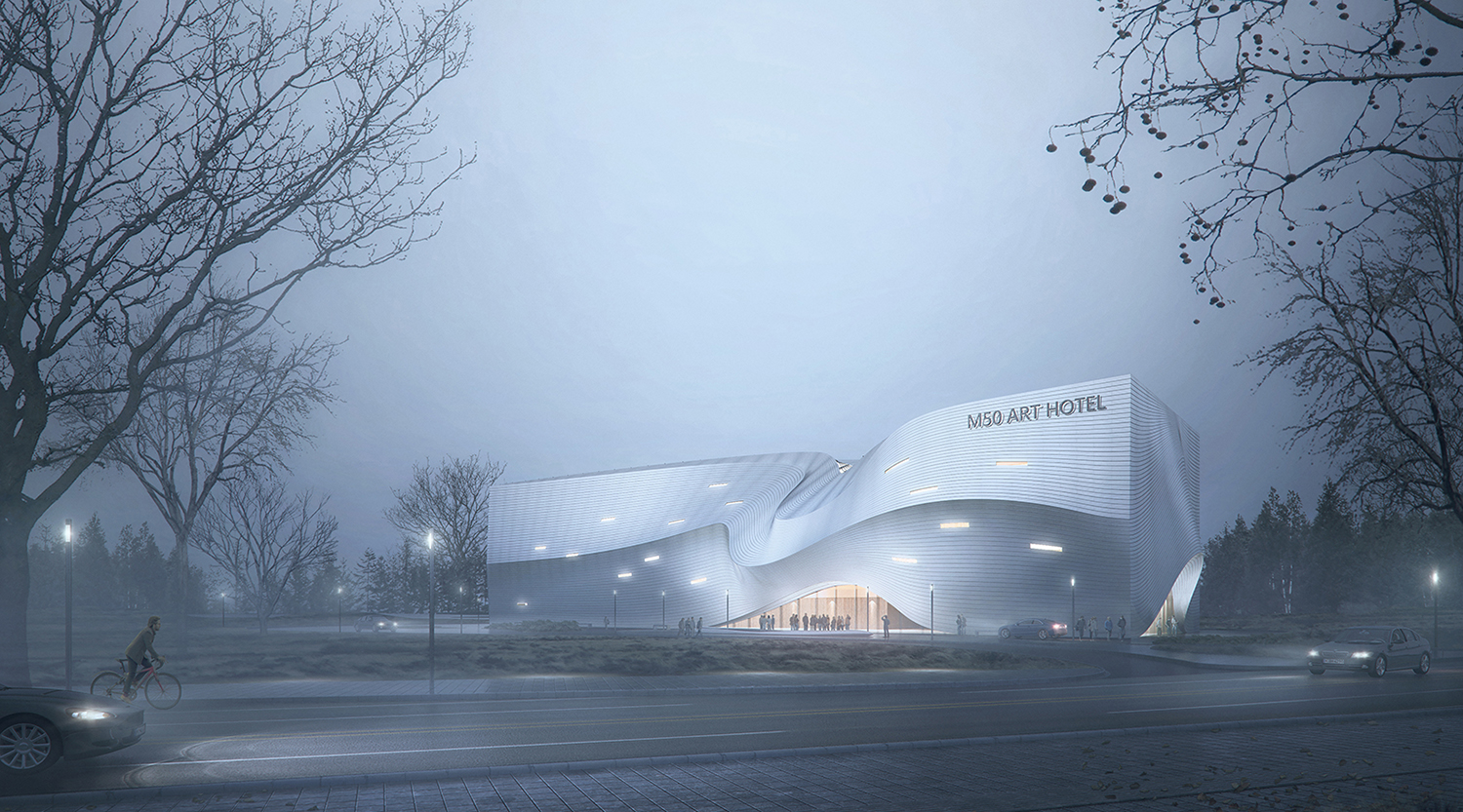 Given that this design is based in Pingle, Sichuan — a town whose plan is musically themed — a song became the primary inspiration for the proposal. The shape is derived from the motion of the plucked string of a guqin, a Chinese instrument, at the climax of the song “Feng Qiu Huang”. For this reason, the studio wove in local culture and lore with a futuristic design language. The dip in the curve creates the main entrance and the horizontal lines on the surface give the illusion of strings. The studio has also incorporated vegetation in the interiors.

This project was on the forefront of the of recent trend in curved white forms, which continue to grow more and more popular. However, while such designs are becoming more contemporary, many architects are still trying to tie them back to the local culture and history. 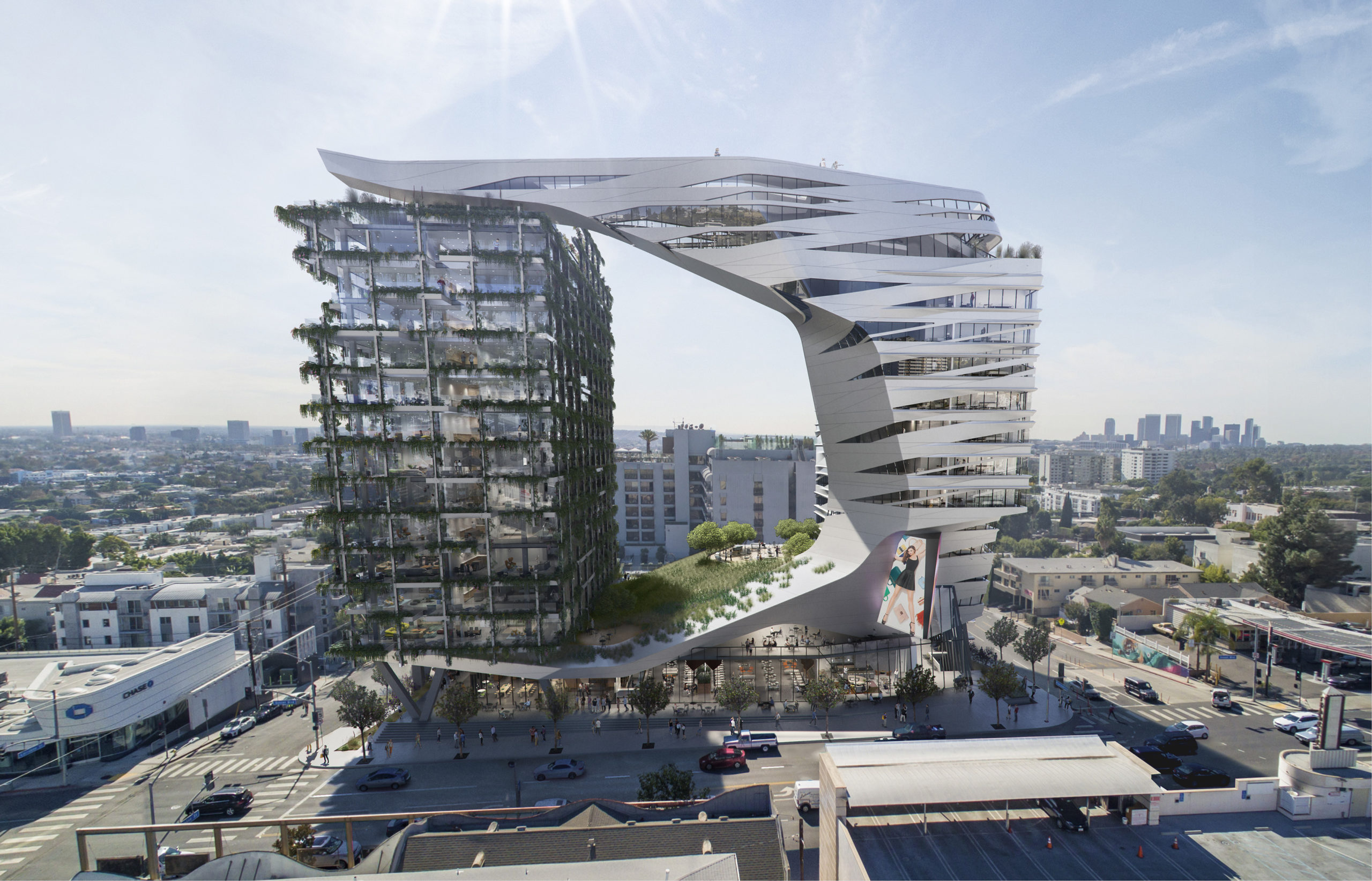 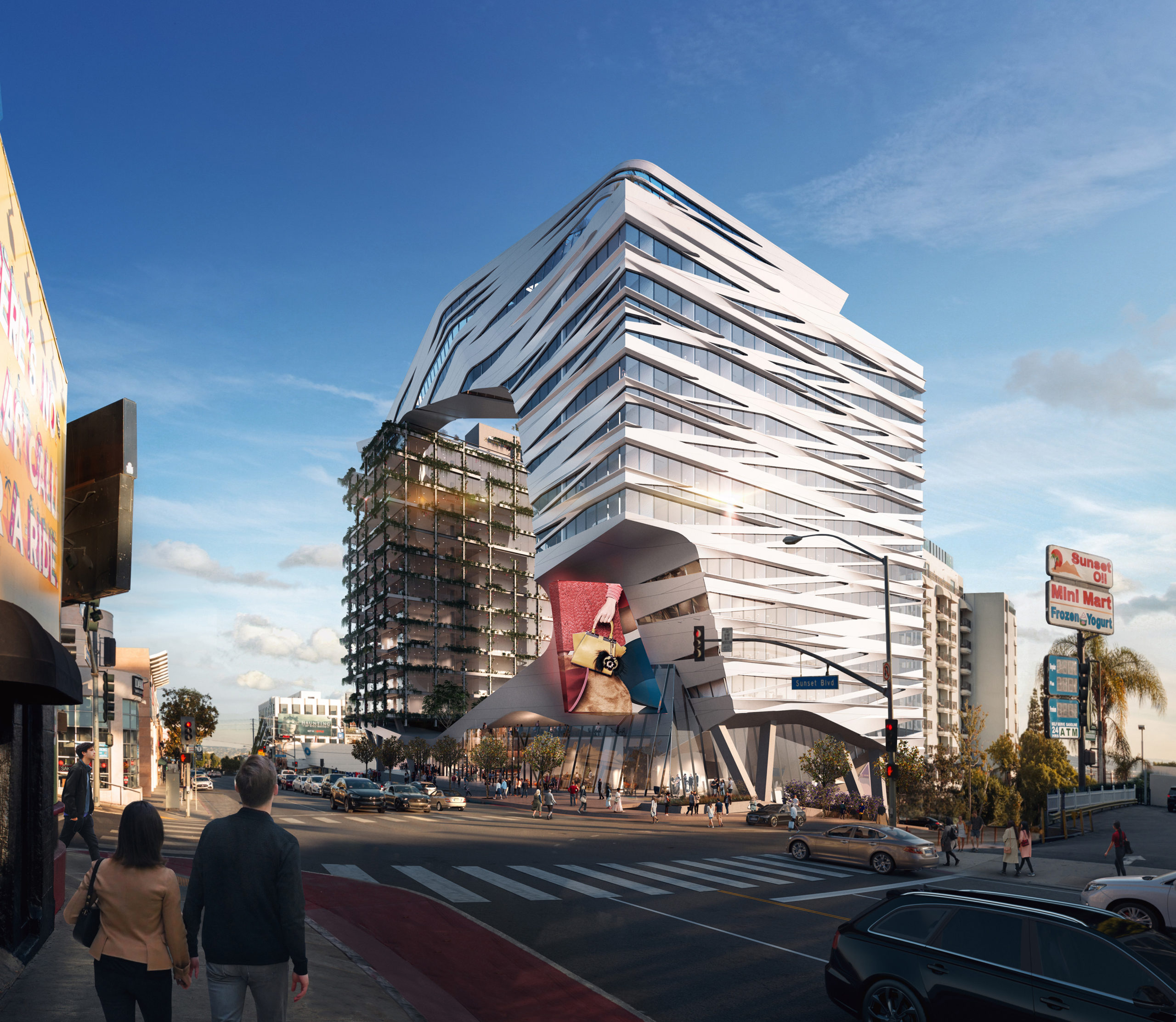 This winning competition entry is a mixed-use project in West Hollywood’s Sunset strip. The structure comprises 115 hotel rooms, 31 condos, 10 affordable housing units, a gym and spa, a restaurant and a rooftop pool. It also features an 820 square foot (250 square meter) billboard for advertising in this prime location. The structure has two main components: a residential glass tower and an abstract white form that is connected to the tower on the top. The connecting bridge on the top houses the recreational amenities.

Like the award-winning designs in the previous years, expansive panels of glass and striking white lines dominate this design. One can also see the evolution of abstract forms and complex structural framework. There is also a focus on incorporating nature within the design by adding vegetation on vertical surfaces. 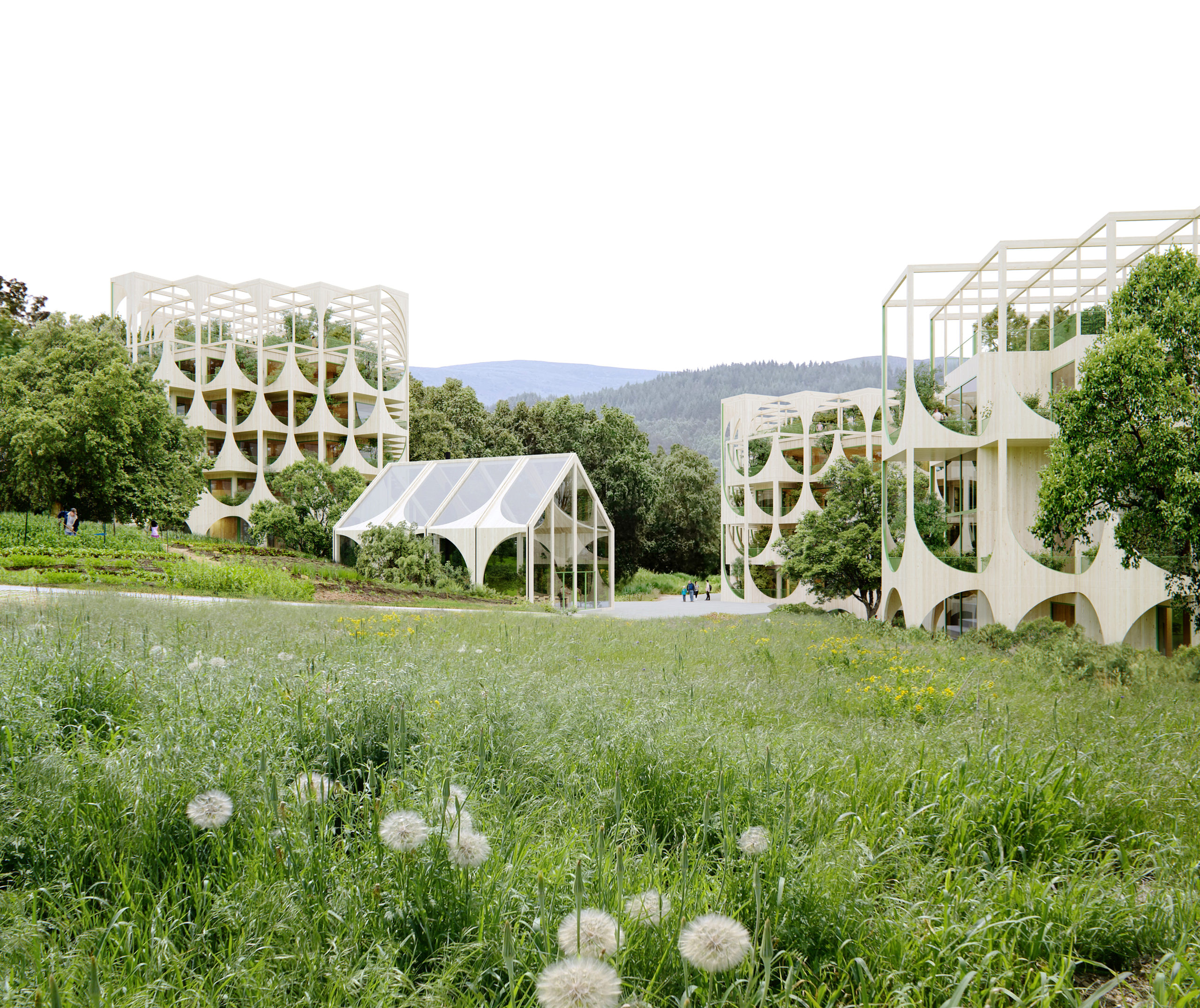 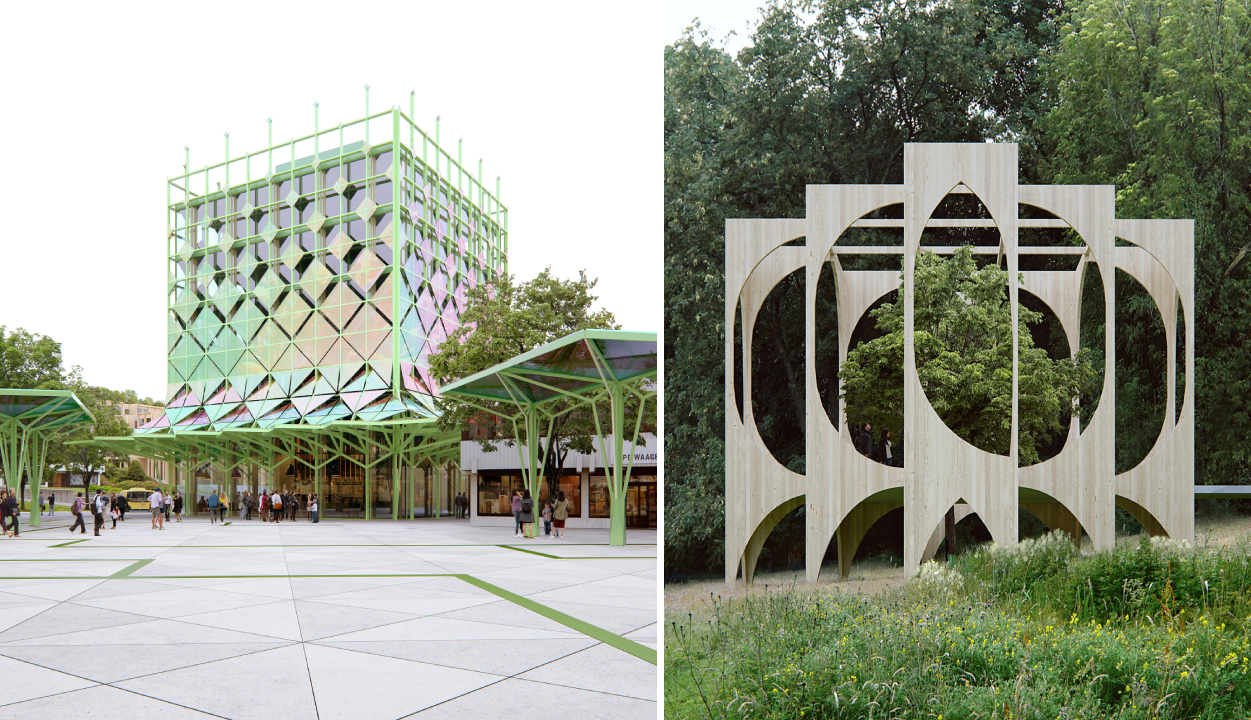 Images by KVANT-1 and Kaleidoscope

A strong example of sustainable design, this solar-powered mixed-use complex features housing, an innovation hub, recreational spaces and a garden. The studio uses photovoltaic ‘SmartPERGOLA’ modules in meeting places and photovoltaic panels in its SmartHUB to generate energy. The housing complex, also known as GrowHOUSE, features a system to harvest rainwater.

This structure represents the shift towards green architecture. Buildings of the future will not only have to consume energy efficiently but also find ways to create a self-sustaining ecosystem. Modular construction, such as the prefabricated CLT blocks proposed in this design, also makes projects more sustainable, less harmful to the environment and quicker to execute.

Could your project complete our decade of inspirational design? Submit it for the 10th Anniversary A+Awards for a chance to take the final place in this collection! Enter your work before December 17th, 2021 to get your firm in the running for global recognition:

The post Designs of the Decade: The World’s Best Architecture Visualizations From 2012 To Today appeared first on Journal.

Did you miss our previous article…
https://thrivingvancouver.com/?p=751